Plastic Surgery of Head and Neck 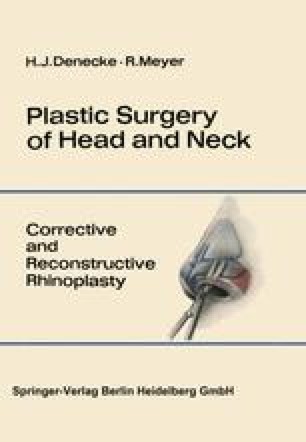 The shape of the nose can be very diverse. The notations of the anthropologists, physiognomists, creative artists and plastic surgeons concerning this subject are well known. Great artists like Policlitus, Myron, Vitruvius, Michelangelo, Leonardo da Vinci, Dürer and later Schadow tried to set up laws and rules of construction according to which human beauty can be formed. A figure constructed according to such rules is called a canon. Albrecht Dürer was the first to try to classify nasal shapes at all systematically. He arranged them on the basis of proportional differences. Topinard was one of the first in the 19th Century to deal with the subject of nasal shape. He determined five basic types: the eagle-nose, the straight nose, the stub nose, the Semitic nose and the hawk-nose. — Fig. 15 shows a comparison of nasal shapes which play a role in corrective rhinoplasty today. In numerical order they are as follows: 1. normal nasal profile, 2. saddle nose, 3. lorgnette nose, 4. flattened nose, 5. pointed nose, 6. saddle nose with prominent tip, 7. straight nose with protruding tip, 8. nose with hanging columella, 9. Greek nose, 10. Roman nose, 11. Semitic nose, 12. Assyrian nose, 13. Negroid nose, 14. Aztec nose, and 15. the so-called modern American nose. On the one hand this list contains nasal shapes according to the system of Martin, and on the other hand anatomical varieties from the viewpoint of the plastic surgeon, as they were classified by Joseph and by Dufourmentel. Here this is only a matter of classification according to profile view. In addition to that there are the variations from the normal nose which one only sees in a full-face view, such as wide nose, narrow nose, dog-nose and double nose, wide nasal tip or potato nose, and partial or complete deflected nose. Further malformations of the nose are partial or complete defects and nasal deformities of high degree which are described extensively in the respective chapters.

Nasal Bone Lateral Cartilage Profile View Saddle Nose Lower Lateral Cartilage
These keywords were added by machine and not by the authors. This process is experimental and the keywords may be updated as the learning algorithm improves.
This is a preview of subscription content, log in to check access.