Occupational and Environmental Cancers of the Respiratory System 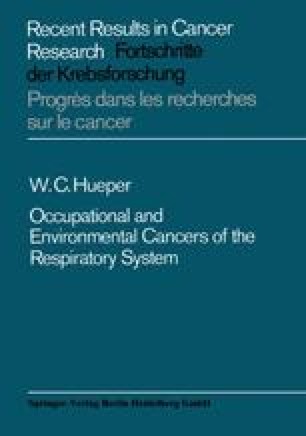 The evidence presented establishes definitely the fact that numerous man-made and man-used respiratory carcinogens have been introduced into the human environment during the past 150 years and that they are responsible not only for a rapidly growing number of occupational cancers of the lung, pleura, larynx, nasal cavity and paranasal sinuses, but evidently also play a significant role in the causation of such cancers in the general population through their direct or indirect, local and general spread into the atmosphere, especially of urban and industrialized regions. Since cancers of the respiratory system are still among the least therapeutically controlled malignant tumors and have alarmingly increased in frequency during the last 60 years, they represent an important problem for applied cancer prevention.

Paranasal Sinus Occupational Cancer Monetary Asset Cancer Hazard Burned Meat
These keywords were added by machine and not by the authors. This process is experimental and the keywords may be updated as the learning algorithm improves.
This is a preview of subscription content, log in to check access.