Structure and Collisions of Ions and Atoms 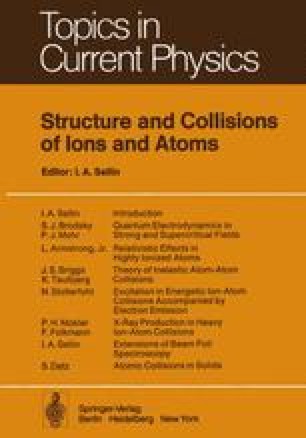 The atomic and molecular physics of heavy particles as investigated with charged particle accelerators has become a clearly identifiable field in very recent years. To a great extent this development has paralleled similar growth in the heavy-ion nuclear physics field. The present ability to create almost any ion charge and excitation state of any element at least as heavy as krypton in experimentally useful amounts, and a good many charge and excitation states of substantially heavier elements, has provided the technical means for studies of the structure and lifetimes of few-electron ions, photon and electron spectroscopy on both few- and many-electron excited states, and collisional production and quenching of these ions in both solid and gaseous targets. Many of the states found are multiply excited, have high angular momenta and high excitation energies, and decay not only by allowed processes but also through strong violation of the normal selection rules for radiative and autoionizing processes. Theories of uv, xuv, and x-ray production; ionization; rearrangement in ion-atom collisions; and the penetration of charged particles in condensed matter are all receiving new experimental input from this research. A number of puzzling new phenomena little considered and not accounted for quantitatively by these theories have very recently been discovered. Possibilities for tests of quantum electrodynamics — especially in the domain of so-called supercritical electric fields — in tandem with possibilities for access to the spectroscopy of superheavy atoms and molecules are rapidly becoming actualities. Characterization of even very basic phenomena that will govern production of such systems, e.g., multiple electron ionization and excitation in collisions, has barely begun.

Heavy Particle High Excitation Energy High Angular Momentum Charged Particle Accelerator Strong Violation
These keywords were added by machine and not by the authors. This process is experimental and the keywords may be updated as the learning algorithm improves.
This is a preview of subscription content, log in to check access.