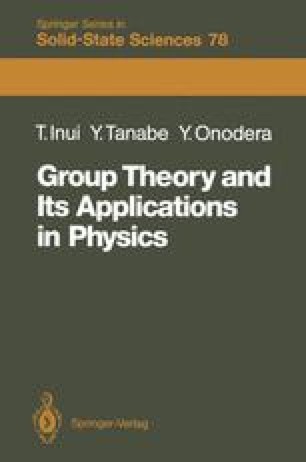 Symmetry and the Role of Group Theory

Any student of science knows nowadays that the basic units of materials are atoms and molecules and that these microscopic building blocks aggregate together to form macroscopic bodies. In early days, chemists tried to understand the binding of molecules in chemical reactions—for example, carbon and oxygen molecules reacting to form carbon oxide—by imagining that each molecule had its own key or hook to catch other molecules with. This primitive model was later replaced by Lewis’s octet or valence model (1916), which led to a successful explanation of the saturation of valence. In 1919, Kossel reached an (even quantitative) understanding of the growth of beautiful crystals, such as rock salt, by his theory of valence as heteropolar bonding before the advent of quantum mechanics (1925). With the development of quantum physics, quantitative treatments have been developed for the energy-level structures of atoms, molecules and solids and radiative processes involving them. Homopolar binding, which was beyond the realm of classical physics, was also given an explanation by Heitler—London theory as originating from quantum-mechanical resonance. It should also be remarked that characteristic features of metallic binding are now well understood as a new mechanism of cohesion. Most readers will already be familiar with these facts, to some extent.

Rock Salt Mirror Reflection Original Pattern Twofold Axis Primitive Model
These keywords were added by machine and not by the authors. This process is experimental and the keywords may be updated as the learning algorithm improves.
This is a preview of subscription content, log in to check access.