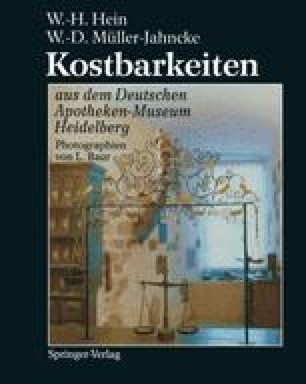 When visitors to the Heidelberg Castle pass through the tower gate and enter the castle courtyard as far as the “well-house”, they see on their right the facade of the Ottheinrich Building. Erected during the short reign (1556–1559) of Prince Electorate Ottheinrich of the Palatinate, it is the loveliest and most significant Renaissance building in Germany. The portal of the German Pharmacy Museum lies under the double outside staircase on the ground floor. Although the museum was founded in 1937 and opened to the public in 1938 in Munich, it remained open only until 1944, when it was hit by incendiary bombs and gutted by fire. After the war, the remains of this unique collection were given a provisional home in Bamberg. When a new, easily accessible location was sought, Heidelberg was chosen. Dr. Werner Luckenbach (1900–1982) undertook the reestablishment of the museum. He was so successful at integrating four centuries of displays of all types and origins into the historical rooms that the result is an impressive, revealing survey of the development of pharmacy and pharmaceuticals.