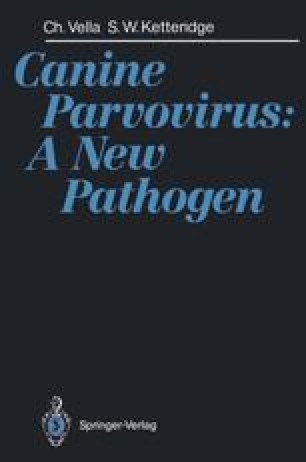 CPV appears to be the third variant of FPV to have arisen, following MEV and quite probably RPV. Although there is little doubt that FPV is able to cross the species barrier, available evidence seems to suggest that CPV is only virulent in canines. However, in contrast to FPV, MEV and RPV, CPV does have the ability to replicate in the laboratory in a range of cultured animal cells derived from several species, including human and bovine cell lines. Not only does it replicate, but high passage of CPV in feline and canine cells can induce antigenic and genetic variants. This raises the possibility that there may be some potential for CPV to spread into further species unrelated to the dog. At present, though, there is no irrefutable evidence of CPV causing disease in any other species of animal.

Vaccine Strain Protective Antigen Canine Distemper Virus Live Vaccine Strain Terminal Inverted Repeat Sequence
These keywords were added by machine and not by the authors. This process is experimental and the keywords may be updated as the learning algorithm improves.
This is a preview of subscription content, log in to check access.