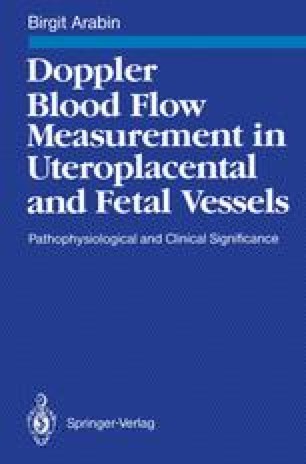 The Doppler effect was described for the first time by Christian Johann Doppler in 1842 (Fig. 1). Doppler observed that stars moving away from the earth radiated an increasingly reddish light whereas stars moving toward the earth radiated an increasingly bluish light. Since the color of light depends on the frequency, Doppler surmised that the frequency of a traveling wave changes when the observer and the source of the wave move in relation to one another. The change in the observed frequency of the traveling wave is now referred to as a Doppler effect. In 1845, Buys-Ballot applied the Doppler principle to sound waves: the frequency of a sound wave increases when the source of the sound approaches the observer, and it decreases when it moves away from the observer. The change between the transmitted frequency and the received frequency (Doppler shift) depends on the velocity of the motion and on the angle between the direction of motion and the observer.

Blood Flow Velocity Pulsatility Index Umbilical Artery Pulse Repetition Frequency Ultrasound Wave
These keywords were added by machine and not by the authors. This process is experimental and the keywords may be updated as the learning algorithm improves.
This is a preview of subscription content, log in to check access.