Indicators and Trends in Health and Health Care 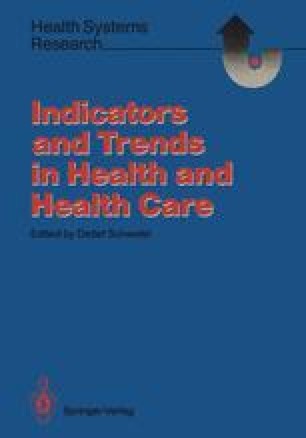 The OECD data watch of health indicators, though still in an early stage of development, is grounded on an explicit theory of the political functions of social reporting. An all-embracing health accounting approach has guided the entire effort. It has proceeded, unlike most institutional data collation exercises, through a “massaging” of national routine data processed at the centre rather than through questionnaires, but with a strong interaction between the national data agencies and the estimator (resulting in the availability of much hitherto unaccessible information). As for comparability, considerable stress has been laid on reconstructing aggregates from detailed sub-aggregates; more emphasis has been put on trends than on levels because precision is not yet attainable; large differences reflect probably real world variations, not statistical inconsistencies. Numbers can — independently of the analysis which they will ultimately serve — tell a story. Some trends not observed till today have probably a considerable relevance for policy interpretation; a few are shown, centred on price disparities and dispersions in the quantities consumed or inputs utilized. The lack of output indicators — still considered premature at the international and even national level — is a major gap in the data system, but some progress has been achieved.

Health Expenditure Social Reporting Health Accounting Stock Indicator Price Disparity
These keywords were added by machine and not by the authors. This process is experimental and the keywords may be updated as the learning algorithm improves.

Jean-Pierre Poullier is associated with the Organisation for Economic Co-operation and Development, Paris. The opinions expressed in this contribution do not necessarily reflect those of the OECD.