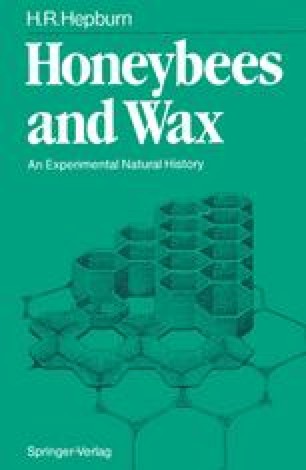 The Origin of Beeswax: an Historical Perspective

Speculations on the origins of beeswax have been with us since the days of Aristotle. His views are the oldest known to have survived into modern times (Fraser 1931). A keen naturalist, the ancient Greek wrote (between 344 and 342 B.C.) that beeswax is produced by flowers and contained in the resinous gums of trees and that it is carried back to the hive on the legs of bees. A couple of centuries later the accomplished Roman apiculturalist, Varro (116 to 27 B.C.) published an annotated check-list of bee plants. In his botany it appears that the pomegranate and asparagus were sources of pollen and that the olive yielded only wax. More versatile plants included beans and gourds which produced wax and pollen; poppies gave both wax and honey. Finally, almonds and coleworts topped the list of resources, yielding the triad: wax, honey and pollen. Against this, Pliny the Elder (23 to 79 A.D.), who lacked the critical insight of his predecessors, asserted that bees obtain wax from all flowers except sorrel and thorn.

Pollen Load Critical Insight Pollen Forage Candle Flame Round Globe
These keywords were added by machine and not by the authors. This process is experimental and the keywords may be updated as the learning algorithm improves.
This is a preview of subscription content, log in to check access.