The Wild Mouse in Immunology 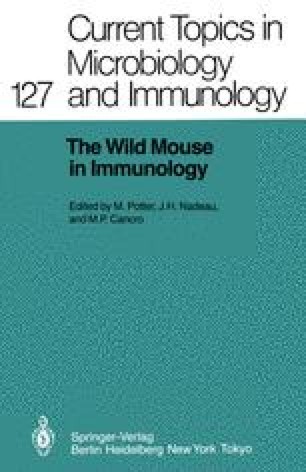 The major urinary proteins are a group of closely-related polypeptides of low molecular weight (17,800) and acidic isoelectric points. As their name indicates, collectively they represent the predominant protein fraction of mouse urine, and in male mice may be excreted at the rate of 20 mg per day (Szoka and Paigen 1978). These urinary proteins are synthesized in the liver where MUP mRNA accounts for 5% of the total messenger RNA (Hastie et al. 1979). Inbred male mice excrete about 20 times more MUP than females and have about five-fold higher MUP mRNA levels in the liver. MUP mRNA has also been detected in the submaxillary, lachrymal, and mammary glands (Shaw et al. 1983). The function of MUPs and whether they appear in other body secretions besides urine is not known. The genes coding for the MUPs are members of a multigene family with approximately 30–35 copies (Hastie et al. 1979; Bishop et al. 1982). The gene cluster has been mapped to chromosome 4 and is linked to the brown locus (Bennett et al. 1982; Krauter et al. 1982; Bishop et al. 1982). Recent work (Clark et al. 1984) indicates that many of the MUP genes on chromosome 4 are organized pairwise in a divergent fashion with each pair of consisting of about 45 kb of DNA.

Inbred Strain Multigene Family P199 Sequence Body Secretion Mouse Urine
These keywords were added by machine and not by the authors. This process is experimental and the keywords may be updated as the learning algorithm improves.
This is a preview of subscription content, log in to check access.