Biology of Ovarian Follicles in Mammals 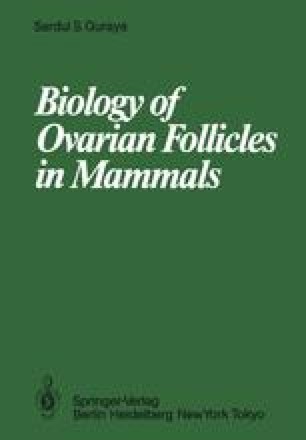 Biology of Ovarian Follicles in Mammals pp 228-275 | Cite as

Follicular atresia in the ovaries of mammals is a widespread degenerative process by which the follicles lose their integrity and the major portion of oocytes at variable stages of their development, growth and differentiation, as well as during all stages of the ovarian cycle, is lost (Fig. 3) (Ingram 1962, Turnbull et al. 1977, Byskov 1978, Brand and de Jong 1973, van der Merwe 1979, Peters and McNatty 1980, Ryan 1981). Extensive loss of germ cells as a result of atresia occurs during the development and maturation of mammalian ovary (Guraya 1977 a), during puberty, oestrous cycle and pregnancy (Kaur and Guraya 1985). The incidence of follicular atresia is constant within a species but varies between species (Ryan 1981). It occurs more frequently in the advanced stages of follicular growth, even though there are more follicles in the early stages of development in the ovary at any time (Himelstein-Braw et al. 1976, Richards 1980).

Granulosa Cell Follicular Fluid Antral Follicle Theca Cell Follicular Growth
These keywords were added by machine and not by the authors. This process is experimental and the keywords may be updated as the learning algorithm improves.
This is a preview of subscription content, log in to check access.