Treatise on the Shift Operator 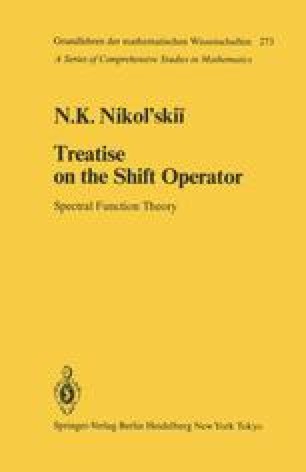 Individual Theorems for the Operator S*

Only a small portion of our knowledge on S*-invariant subspaces can be obtained directly from the canonical representation K = H2 ⊝ ΘH 2 , Θ an inner function. For instance, one can establish that the hull ∨(K i : i = 1, 2,) of two such subspaces K1 and K2 is again a non-trivial S*-invariant subspace in its own right, because ∨(K i : i = 1, 2)⊥ = Θ1 H2 ∩ Θ2 H2 = ΘH2 (≠{O} where Θ is the LCM of Θ1 and Θ2. However many other theorems require a deeper analysis. This Lecture conventionally falls into two parts: the first one is devoted to a detailed analysis of S*-cyclic vectors (that is, elements f in H2 such that \( E_f^{ * \underline{\underline {def}} } \vee \left( {{S^{ * n}}f:n \geqslant \left. 0 \right) = {H^2}} \right)\) and the second one to an approximation theoretic characterization of S*-invariant subspaces in terms of the root vectors of that operator.

Orthogonal Projection Invariant Subspace Toeplitz Operator Blaschke Product Canonical Representation
These keywords were added by machine and not by the authors. This process is experimental and the keywords may be updated as the learning algorithm improves.
This is a preview of subscription content, log in to check access.