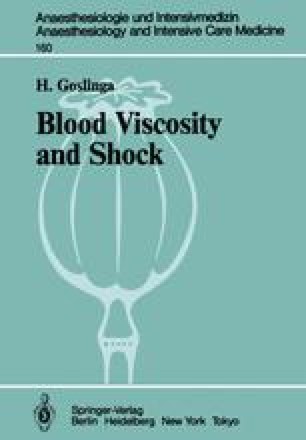 Effects of Viscosity Reduction by Means of Defibrination (Arvin) and Moderate Hemodilution (0.9% NaCl) in a Shock Model with Intact Animals

A reduction in viscosity was induced by means of defibrination (Arvin) and moderate hemodilution (0.9% NaCl) in intact dogs. A shock-protocol was followed by stepwise withdrawal of blood (5 ml/kg body weight/5 minutes). After a period of one hour at an aortic pressure of 35 mmHg, the original volume of blood was reinfused.

In the case of Arvin, the significant differences which were observed between the defibrinated group and the controls were all in favor of the latter. This is in sharp contrast to the results of defibrination with Arvin in a model of an “isolated peripheral circulation” carried out with the aid of total heart-lung bypass (see Paper I).

The differences in the Arvin group usually only became significant after shock provocation, accompanied by signs of relative hypovolemia. These signs were absent in the hemodilution series, even though the decrease in viscosity produced by Arvin and hemodilution were comparable. It seems likely that a reduction in viscosity with Arvin should be combined with expansion of the blood volume to assure normovolemia. There is an obvious parallel between this and peripheral vasodilatation, which is also of little use without compensation for the relative hypovolemia.

Shear Rate Pulmonary Artery Pressure Pulmonary Vascular Resistance Pulmonary Capillary Wedge Pressure Blood Viscosity
These keywords were added by machine and not by the authors. This process is experimental and the keywords may be updated as the learning algorithm improves.
This is a preview of subscription content, log in to check access.