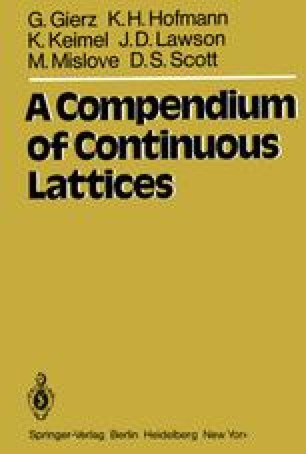 The first topologies defined on a lattice directly from the lattice ordering (that is, Birkhoffs order topology and Frink’s interval topology) involved “symmetrical” definitions—the topologies assigned to L and to Lop were identical. The guiding example was always the unit interval of real numbers in its natural order, which is of course a highly symmetrical lattice. The initial interest was in such questions as which lattices became compact and/or Hausdorff in these topologies. The Scott topology stands in strong contrast to such an approach. Indeed it is a “one-way” topology, since, for example, all the open sets are always upper sets; thus, for nontrivial lattices, the T0-separation axiom is the strongest it satisfies. Nevertheless, we saw in Chapter II that the Scott topology provides many links between continuous lattices and general topology in such classical areas as the theory of semicontinuous functions and in the study of lattices of closed (compact, convex) sets (ideals) in many familiar structures.

Complete Lattice Continuous Lattice Topological Algebra Algebraic Lattice Interval Topology
These keywords were added by machine and not by the authors. This process is experimental and the keywords may be updated as the learning algorithm improves.
This is a preview of subscription content, log in to check access.