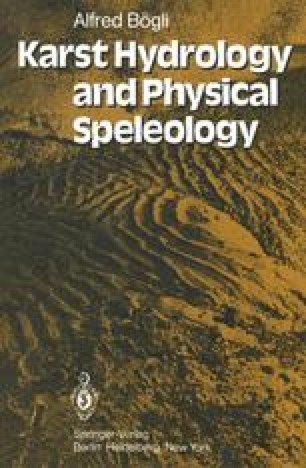 Speleometeorology is concerned with instantaneous processes in the atmosphere of caves, speleoclimatology with their average states. However, with the exception of wind, variations in the parameters are so small that there is only a slight difference between instantaneous and average values. Therefore speleometeorology and speleoclimatology are usually used with the same meaning, apart from their differing points of view. The former is preferred in English and in German usuage (Kyrle, 1923; Myers, 1962; Wigley and Brown, 1976), the latter in French (Gèze, 1965). In Germany and Austria mining terms such as Höhlenwetter, Bewetterung and Wetterwechsel (change in wind direction) are frequently used, thus in Kyrle who defines Höhlenwetter as “the total contents of the cave in gas-form”. He supports the use of these expressions with the argument that “cave meteorology is very similar to that in mines” (p. 203).

Melting Snow Cave System Open Atmosphere Underground Cavity Lite Weight
These keywords were added by machine and not by the authors. This process is experimental and the keywords may be updated as the learning algorithm improves.
This is a preview of subscription content, log in to check access.