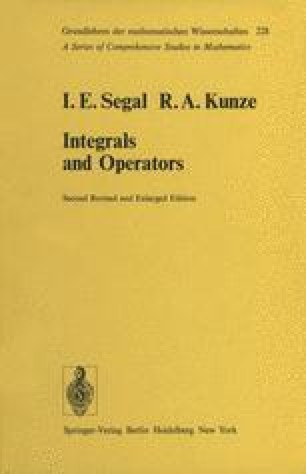 The Trace as a Non-Commutative Integral

The philosophy of the theory of integration has evolved considerably in the past several decades. Newer applications have tended to de-emphasize point-wise features in favor of global and/or algebraic ones. This has led in particular to a realization that the theory of the trace on the ring of all bounded operators on a Hilbert space was parallel in a number of ways to abstract Lebesgue integration theory, and to the development of a natural simultaneous generalization of both theories. In these sections we first develop the theory of the trace in B(H) from a standpoint that emphasizes the integration-theoretic analogy on the one hand and points towards the generalization to arbitrary rings on the other. We should point out however that the basic results concerning the trace on B(H) were originally obtained quite independently of these considerations, because of their intrinsic interest, and that these results are important for a variety of applications.

Hilbert Space Measure Space Finite Rank Elementary Operator Weak Closure
These keywords were added by machine and not by the authors. This process is experimental and the keywords may be updated as the learning algorithm improves.
This is a preview of subscription content, log in to check access.