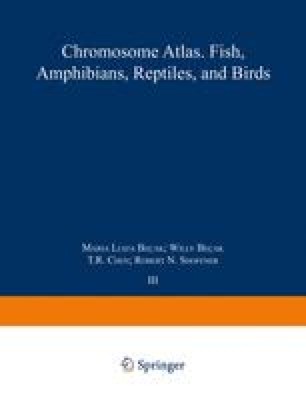 The editors are indebted to Dr. R. Hoffman, Department of Pathology, Tiergesundheitsdienst Bayern, West Germany, who prepared the photographs from which the accompanying karyograms were constructed. The chromosome plates were from leucocyte cultures of adult specimens inhabiting the zoological garden, Frankfurt/Main. Three males and two females were sampled. Dr. Hoffman suggested a tentative chromosome number of 2n = 58, however, in photographs of several spreads we observed a range of 54 to 64. Prior experience suggests that the higher number is usually the best estimate of the actual number. It appears that chromosome 8 is a satellite type which is rare among birds.