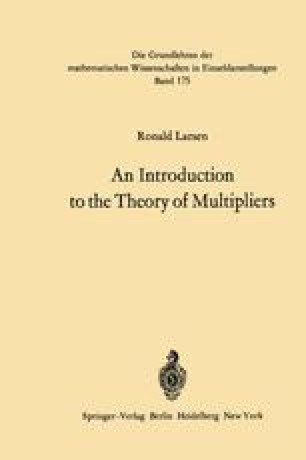 Prologue: The Multipliers for L1(G)

The concept of a multiplier first appears in harmonic analysis in connection with the theory of summability for Fourier series, namely, in attempts to describe those sequences {c n } for which \(\sum\limits_n {{c_n}} {a_n}{e^{\operatorname{int} }}\) is always the Fourier series of a periodic integrable function whenever \(\sum\limits_n {{a_n}{e^{\operatorname{int} }}}\) is such a Fourier series. Subsequently the notion has been employed in many other areas of harmonic analysis, such as the study of properties of the Fourier transformation and its extensions, the investigation of homomorphisms of group algebras, the characterization of group algebras, the study of factorization problems in various topological algebras, the characterization of convolution in terms of its mapping properties, the study of the conjugate Fourier series and of lacunary Fourier series. Multipliers have also appeared in a variety of other contexts, among which we mention the general theory of Banach algebras, representation theory for Banach algebras and locally compact groups, the study of Banach modules, the theory of singular integrals and fractional integration, interpolation theory, stochastic processes, the theory of semigroups of operators, operational calculus, partial differential equations, the study of certain approximation problems and the question of the existence of invariant means.

Banach Space Compact Group Group Algebra Compact Abelian Group Translation Operator
These keywords were added by machine and not by the authors. This process is experimental and the keywords may be updated as the learning algorithm improves.
This is a preview of subscription content, log in to check access.