A History of Ancient Mathematical Astronomy 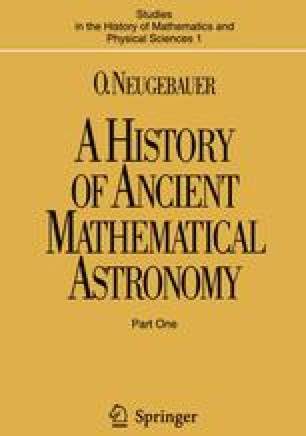 A History of Ancient Mathematical Astronomy pp 541-555 | Cite as

Chapter
Part of the Studies in the History of Mathematics and Physical Sciences book series (HISTORY, volume 1)

The development of a mathematical astronomy, some time in the Persian period, was made possible only by the existence of highly advanced mathematical techniques, the most important of which was the sexagesimal place value notation. We know today that Babylonian mathematics preceded astronomy by more than a millenium but it is impossible to say why its application to astronomy occurred so much later or why and how it occurred at all. It is evident, however, that without flexible numerical methods no real astronomy would have been possible. Purely geometrical ingenuity leads nowhere, as we see in the example of Eudoxus’ homocentric spheres. The decisive role played by the computational procedures in the development of astronomy was badly obscured by the fascination of historians with the geometric aspects of planetary theory. It is correct to say that geometrical models are essential for the Hipparchian-Ptolemaic astronomy, but without the numerical techniques inherited from Babylonia a work like the Almagest could never have been written.