Telecommunications and Energy in Systemic Transformation 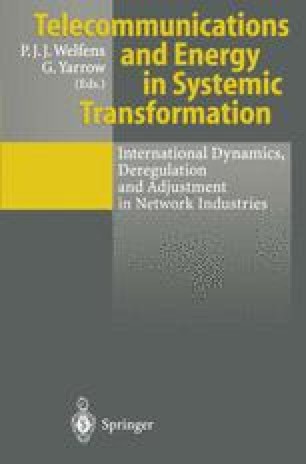 Telecommunications and Energy in Systemic Transformation pp 307-333 | Cite as

Restructuring and Regulatory Reform in the Polish Energy Sector: an Assessment

Interest in liberalization in the electricity and gas segments of the energy sector is a relatively recent phenomenon in Europe, and, although such interest developed somewhat earlier in the United States, the legal and political constraints that inhibit major structural change in North America have meant that developments there have proceeded at a relatively slow pace.1 In Europe, Britain is the country that has implemented the most radical policy reforms and that has taken the greatest strides towards establishing competitive markets. Even in Britain, however, the reform process dates only from the early 1980s and the first pieces of liberalizing legislation — the Oil and Gas (Enterprise) Act 1982 and the Energy Act 1983, which provided for third-party access (TPA) in gas and electricity respectively — were relatively modest steps that did not have major impacts on the ways in which energy markets functioned.2 Major regulatory reforms were only finally implemented during and after the privatizations of the gas industry (1986) and the electricity industry (1990 and 1991).3

Energy Sector Hard Coal Distribution Company Industrial Restructuring Final Customer
These keywords were added by machine and not by the authors. This process is experimental and the keywords may be updated as the learning algorithm improves.
This is a preview of subscription content, log in to check access.