An Integrated Model of Transport and Urban Evolution 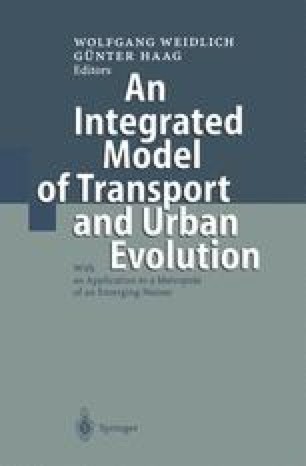 The present chapter describes three scenarios A, B and C. On the one hand we do not only want to simulate the traffic with respect to bikes, buses and pedestrians but also and above all the car traffic. On the other hand there are only rather limited data available concerning the cars. Under this data situation in subsection 10.1 a possibility of a simulation of the car traffic is worked out. This simulation is used in the basic scenario (scenario E) as well as in the three scenarios A, B and C which are described in detail in subsection 10.2. Subsection 10.3 gives an overview over the results of the simulations of scenarios A, B and C in comparison to the basic scenario E. The corresponding figures describing details of the scenarios are found in the appendix A4. In the text of the subsection 10.4 the references to the figures are given. Finally, in 10.5 the results of 10.4 are summarized and detailed conclusions are drawn which complement the more general conclusions and recommendations of chapter 11.

Population Distribution Basic Scenario Planning Scenario Source Traffic Traffic Cell
These keywords were added by machine and not by the authors. This process is experimental and the keywords may be updated as the learning algorithm improves.
This is a preview of subscription content, log in to check access.