Imperfect Information and Investor Heterogeneity in the Bond Market 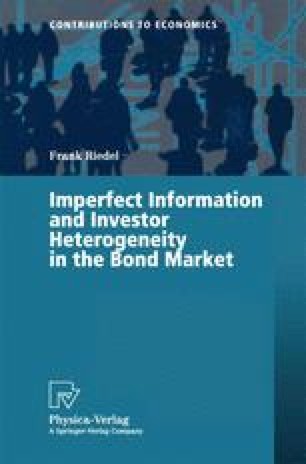 Chapter
Part of the Contributions to Economics book series (CE)

As a first application of the general theory to the theory of the term structure, I study the Preferred Habitat Theory advanced by Modigliani and Sutch [50]. Modigliani and Sutch were primarily concerned with an empirical investigation of the effects of a particular policy of the US government and Federal Reserve, “Operation Twist”, which aimed at “twisting” the yield curve by raising the yield of bonds with short term to maturity and lowering simultaneously long-term rates. It was believed that this policy would help to reduce the balance-of-payments problem of the US. In order to give a rationale for the linear model they estimated, they reviewed the existing theories of the term structure, mainly the Expectations and the Liquidity Premium Hypothesis, and they developed their own theory, which has become known under the name of ‘Preferred Habitat Theory’.

Stock Price Prefer Habitat Term Structure Yield Curve Representative Agent
These keywords were added by machine and not by the authors. This process is experimental and the keywords may be updated as the learning algorithm improves.
This is a preview of subscription content, log in to check access.