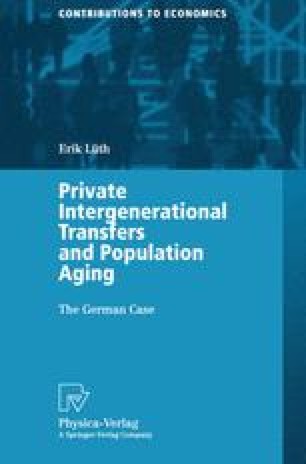 Chapter
Part of the Contributions to Economics book series (CE)

The principal purpose of this study has been to clarify the impact of pop­ulation aging on generational distribution, where special attention has been given to private intergenerational transfers. In view of the critical role of the transfer motive we have begun by presenting competing transfer models as well as their empirical implications. Subsequently, we have reviewed empirical research aimed at identifying a predominant motive for bequests and trans­fersinter vivos. As documented in Chapter 2, empirical evidence in favor of a specific transfer motive is inconclusive. If anything, it has been proved that the volume of transfersinter vivosis significant. Given that transfers before the donor’s death are by definition intentional, this is strong evidence against the standard life-cycle model without a transfer motive as proposed by Modigliani and Brumberg [77]. In addition, it has been established by the literature that Ricardian Neutrality and unequal sharing of bequests is rejected by the data, both strong evidence against pure altruism.

Dependency Ratio Intergenerational Transfer Private Transfer Fiscal Burden Pure Altruism
These keywords were added by machine and not by the authors. This process is experimental and the keywords may be updated as the learning algorithm improves.
This is a preview of subscription content, log in to check access.