Search Games and Other Applications of Game Theory 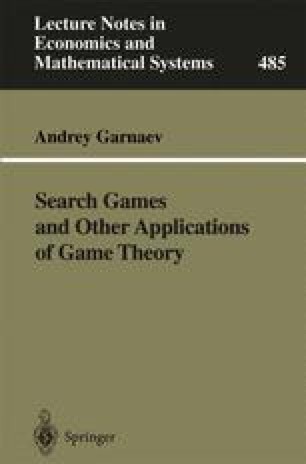 Consider the following zero-sum infiltration problem. There are two players: Guard and Infiltrator (for example, coast guard and submarine.) Guard wishes to protect a channel against penetration by Infiltrator. For this purpose Guard uses an electric cable with length k. We assume Infiltrator knows the length of cable but it is invisible to him. If Infiltrator crossing the channel touches the cable he gets detected and captured by Guard. Consider the following zero-sum game modelling this problem. Guard chooses in integer interval [1, n] an interval consisting of m points where m < n and Infiltrator chooses an integer point, called his point of crossing, in [1, n]. The payoff to Guard equals 1 if the point chosen by Infiltrator is in the interval chosen by Guard and 0 otherwise. A pure strategy of Guard is denoted by i, where i is his point of crossing and a mixed strategy of Infiltrator is the probability vector x = (x1,..., x n ) saying him to choose his point of crossing at i with probability x i . We denote an integer interval consisting of m points and its left endpoint at p by M (p). Then we can denote a pure strategy y of Guard by p, where p ∊ [1, n—m + 1] and p means choosing M(p). A mixed strategy of Guard is the probability vector y = (y1,..., yn-m+1) saying him to choose interval M(i) with probability y i . Let E(x,y) be the expected payoff to Guard if Infiltrator and Guard use the strategy x and y, respectively.

Optimal Strategy Equal Probability Mixed Strategy Pure Strategy Probability Vector
These keywords were added by machine and not by the authors. This process is experimental and the keywords may be updated as the learning algorithm improves.
This is a preview of subscription content, log in to check access.

Cite this chapter as:
Garnaev A. (2000) Ambush Games. In: Search Games and Other Applications of Game Theory. Lecture Notes in Economics and Mathematical Systems, vol 485. Springer, Berlin, Heidelberg