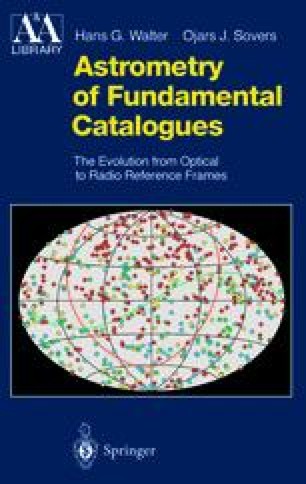 At the close of the 20th century, considerable improvement of astrometric precision was obtained by transferring the telescope site into Earth orbit and by employing space techniques for the observation of celestial objects. Instead of observing from the ground, space astrometry is performed from an observing platform beyond the perturbing atmosphere resulting in minimized refraction, better astronomical ‘seeing’ and, ultimately, in images with well defined diffraction patterns. The price of going into space is the loss of the stable telescope site provided by the motion of the Earth in space, which is very complex but minutely recorded on the ground. In contrast, the spacecraft carrying the instruments is subject to numerous perturbations, sometimes affecting the spatial orientation in unpredictable ways. At first glance, therefore, highly precise positions of individual objects are not expected. Practically, however, it is found that extremely precise angular distances between objects are indeed determinable in space. Subsequently, these differential observations are related to a conventional celestial reference frame of milliarcsecond precision to yield individual object positions of the same order of magnitude (Chap. 7).

European Space Agency Proper Motion Main Grid Primary Star Hipparcos Catalogue
These keywords were added by machine and not by the authors. This process is experimental and the keywords may be updated as the learning algorithm improves.
This is a preview of subscription content, log in to check access.