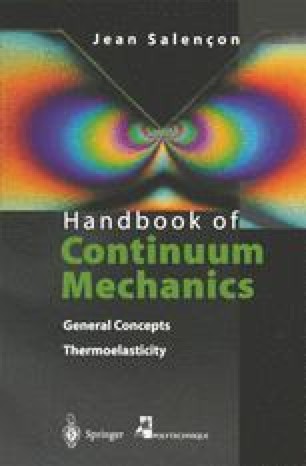 The Virtual Work Approach to the Modelling of Forces

The last three chapters have been devoted to geometrical modelling of the deformable continuum on the basis of our experimental intuition. In order to model the mechanics of the continuum, we must now introduce the idea of forces and establish laws governing the motion and equilibrium of a system in this model. It should be emphasised that, as in all classical textbooks, the word ‘forces’ is used here and in all that follows as a generic term. It does not imply that the corresponding actions are intended to be modelled as concentrated or distributed forces. It is the very aim of the analysis to investigate what force model is relevant.