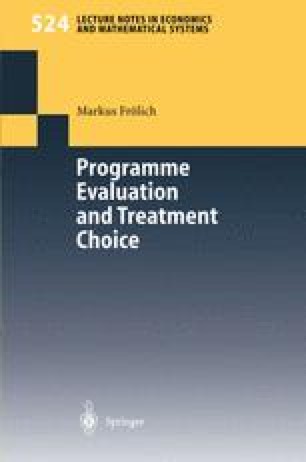 Policy and programme evaluation in a wide sense is concerned with measuring how far a policy or a programme has achieved its intended aims. A policy is hereafter defined as a bundle of R different programmes. This includes the case of evaluating a single programme (R = 2, participation versus non-participation) and evaluating multiple programmes (R > 2). One example of policies consisting of multiple programmes are active labour market policies, which often comprise various public employment programmes, on-the-job training, retraining, classroom training, job search assistance, wage subsidies etc. Another example are rehabilitation policies for the re-integration of people with long-term illnesses, which may consist of different forms of vocational workplace training, vocational schooling, medical rehabilitation and social and psychological programmes. In the following, often the neutral term treatment will be used synonymously for programme, since the methods presented here are not restricted to the evaluation of social policies but apply similarly to, for example, the evaluation of the effectiveness of medical drugs or of different schooling choices, or of the effects of participation in the military. Since participation in a policy is often voluntary, or since full compliance in a ’mandatory’ policy might not always be enforceable, the set of different treatments usually includes a ’no-programme’ or ’non-participation’ option. As it is assumed that all individuals are untreated before participation in the policy, i.e. that they had not participated previously in the programmes,1 this ’non-participation’ treatment is often special in the sense that it is the treatment most similar to the situation before participation in the policy. To illustrate this asymmetry, the treatment set will be indexed by r ∊ {0,..,R − 1}, i.e. consisting of a ’non-participation’ treatment (r = 0) and R − 1 active treatments. In the case of the evaluation of a single programme the treatment set consists of r = 0 (non-participation) and r = 1 (participation).

Propensity Score Instrumental Variable Propensity Score Match Potential Outcome Average Treatment Effect
These keywords were added by machine and not by the authors. This process is experimental and the keywords may be updated as the learning algorithm improves.
This is a preview of subscription content, log in to check access.