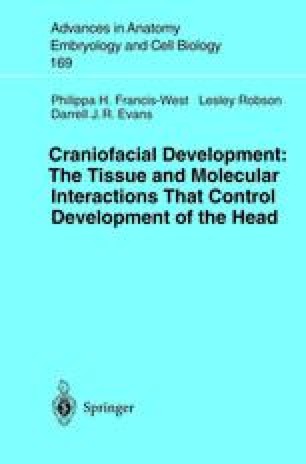 There are two types of bone in the head: endochondral bone, which is formed from a cartilaginous precursor, and membrane (or intramembranous) bone, which arises by direct differentiation of mesenchymal cells into osteoblasts. Endochondral bone forms the chondrocranium — the base of the skull, Meckel’s and hyoid cartilages in the first and second arches respectively, the nasal septum and capsule and the otic capsule. The other bones in the head are formed by intramembranous ossification, which start as ossification centres which spread to form the bone. Secondary cartilages, which are again unique to the head in higher vertebrates, arise in the periosteum of membrane bones in response to movement (reviewed by Fang and Hall 1997). The most important of these is the condylar cartilage on the mandible bone, which persists post-natally. Secondary cartilage has distinct histological properties and functions from primary cartilage. The former is formed in response to pressure changes and is essential for normal growth of the face, whereas the latter is resistant to pressure and initially provides a structural scaffold, and later a growth site in the case of the nasal septum and cranial base, for the developing head.

Neural Crest Cell Nasal Septum Ossification Centre Sagittal Suture Otic Capsule
These keywords were added by machine and not by the authors. This process is experimental and the keywords may be updated as the learning algorithm improves.
This is a preview of subscription content, log in to check access.