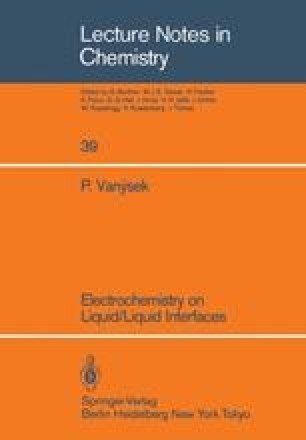 In many respects the treatment of the electrical double layer (cf., e.g. Davies and Rideal 1961, Mohilner 1966) formed between two immiscible solutions of electrolytes is similar to that of metal/electrolyte or semiconductor/electrolyte interface. An interface, which is a site of a potential difference, must exhibit some type of a potential gradient across itself. The electrolyte side of a metal/electrolyte interface is described as being a site of a diffuse double layer — a region with an excess of charge, balancing the charge on the elctrode. On such a model the theory of Gouy (1910) and Chapman (1913) can be applied giving information on a capacitance of the double layer. Based on this theory, the first treatment of ITIES was presented by Verwey and Niessen (1939).

Double Layer Interfacial Tension Surface Charge Density Compact Layer Diffuse Double Layer
These keywords were added by machine and not by the authors. This process is experimental and the keywords may be updated as the learning algorithm improves.
This is a preview of subscription content, log in to check access.