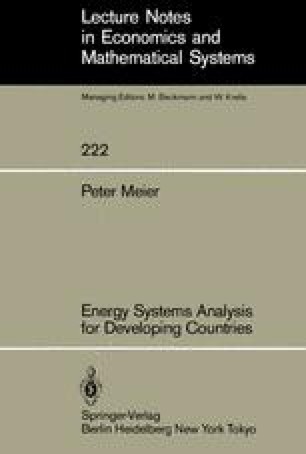 Analysis of investment decisions in the electric sector is a subject with a long history of scholarship, with a rich literature, and extensive applications in practice. Many complex mathematical models are used by electric utilities for planning purposes, some of which, such as the WASP model, have found application in a number of developing countries.1 But given the existence of a number of excellent literature reviews, such as that of Anderson (1972), we shall not attempt to provide any detailed review here. Rather, the emphasis will be on an elaboration of the fundamental concepts involved, and an exposition of modelling approaches that lend themselves to integration with other energy sectors, or to integration with energy system-wide and economy-wide models. Thus, while many of the finer points of reliability analysis, and transmission line planning, are not taken up in any great detail here, we pay a great deal of attention to the interaction between investment requirements in the electric sector to investment flows throughout the economy — a subject taken up in some detail in Chapter 10.2 In this chapter, then, we develop the fundamental concepts; the linearization of load duration curves, formulation of the investment decision as a mathematical programming problem, the complications arising from the addition of a spatial dimension, and some environmental considerations.

Transmission Line Instal Capacity Electric Utility Electric Sector Load Curve
These keywords were added by machine and not by the authors. This process is experimental and the keywords may be updated as the learning algorithm improves.
This is a preview of subscription content, log in to check access.