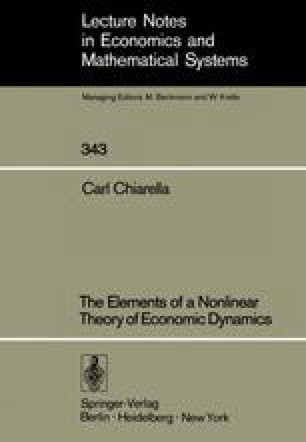 In chapter one we stated that the main aim of our thesis was to routinize the use of nonlinear methods in dynamic economic analysis. We achieved this aim by making use of the method of averaging and the method of discontinuous or relaxation oscillations to investigate nonlinear models which can be reduced to a set of nonlinear differential equations on the plane having limit cycle solutions. Higher dimensional models may be investigated by use of the concepts of centre manifold theory, which concentrates attention on limit cycle motion on an appropriate two dimensional manifold. The method of averaging usually yields a differential equation containing two elements. The first consists of the linearised part considered in the traditional local linear analysis. The second is a term which captures the qualitative effects of the nonlinearities in the model. The equilibrium of this differential equation approximates the amplitude of the limit cycle motion of the nonlinear model; by considering the effect of parameter shifts on this equilibrium we are able to determine the qualitative effects of parameter shifts on the amplitude of the cycle. In effect the qualitative analysis of the limit cycle equilibrium has been reduced to a comparative static type calculation since the principal achievement of the method of averaging is to reduce the analysis of a two dimensional limit cycle to that of a point equilibrium. The possibility of doing a comparative dynamic analysis in this way is an advantage of the approach we propose compared to those approaches referred to earlier in the thesis which rely on the use of existence theory of nonlinear differential equations and which cannot do much more than tell us that a limit cycle exists. One of the major criticisms of the use of limit cycles to model economic fluctuations is that the fluctuations are too regular but the discovery of the concept of chaotic behaviour overcomes this criticism — as we have seen such behaviour can arise in one dimensional difference equation models or in differential equation models of order at least three. We believe that the tools we have provided should allow the economic theorist to finally break free of the straitjacket of local linear analysis which has prevented a proper analysis of many important issues in dynamic economic theory. The economic theorist will henceforth be able to concentrate on questions such as when is a nonlinear analysis required, what are the important nonlinearities and how best to model these.

Business Cycle Chaotic Behaviour Nonlinear Differential Equation Parameter Shift High Dimensional Model
These keywords were added by machine and not by the authors. This process is experimental and the keywords may be updated as the learning algorithm improves.
This is a preview of subscription content, log in to check access.