The Application of Biofluid Mechanics 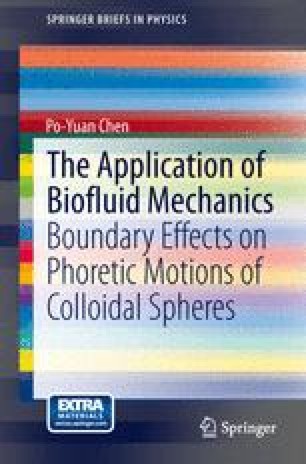 The Application of Biofluid Mechanics pp 33-48 | Cite as

This chapter concerns the parallel penetration motion of the single spherical vesicle particles driven by the settled concentration gradient. The boundary conditions of the plane wall have two situations: the solute that cannot be penetrated; and the linear distribution of the solvent quality. As for the boundary effects of the plate for osmophoretic bathing, one is from the interaction generated between the particles and the plate, and another by the viscous effects of the fluid. This chapter makes boundary collocation method to calculate the vesicle particle penetration in various situations of motion velocity and reflection, compares the reflection method, and makes sure their results are consistent. The border effect of plate penetration motion is determined by the characteristics of the particles, as well as the relative distance from the plate and also the boundary conditions of the solute on the plate.

Solute Concentration Rotation Velocity Linear Distribution Plane Wall Reflection Method
These keywords were added by machine and not by the authors. This process is experimental and the keywords may be updated as the learning algorithm improves.
This is a preview of subscription content, log in to check access.

Cite this chapter as:
Chen PY. (2014) Osmophoretic Motion of the Spherical Vesicle Particle Parallel to Plane Walls. In: The Application of Biofluid Mechanics. SpringerBriefs in Physics. Springer, Berlin, Heidelberg. https://doi.org/10.1007/978-3-642-44952-9_3