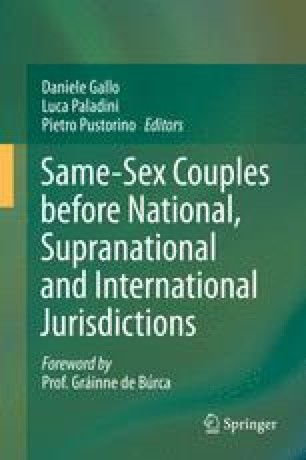 The Legal Situation of Same-Sex Couples in Greece and Cyprus

This chapter explores in depth the question of the legal recognition of same-sex couples in Greece and Cyprus. The chapter begins by presenting and critically examining the (narrow reading of) existing law in both countries, and concludes that, according to the dominant view, same-sex couples are excluded from both civil marriage and civil unions. The picture is further complemented by an analysis of the most consequential judicial rulings, both already delivered and pending. As evidenced through the discussed case-law and reports of independent authorities, there is room for optimism in these two countries regarding the future developments in the legal protection of same-sex couples. Interestingly, any change in the law in both countries will bear the stamp of Strasbourg and Brussels.

Sexual Orientation Legal Recognition Civil Union Greek Government Grand Chamber
These keywords were added by machine and not by the authors. This process is experimental and the keywords may be updated as the learning algorithm improves.
This is a preview of subscription content, log in to check access.

The authors wish to thank Zinaida Onoufriou and Nasia Dionysiou of the Office of the Cyprus Ombudsman for their kind help.

On 7 November 2013, the ECtHR handed down its much-awaited decision in Vallianatos and Others v Greece, and delivered the first major win for gay rights in Greece. In an exemplary ruling, the Grand Chamber of the Court held the Greek Government to be in violation of Article 14 (prohibition of discrimination) taken in conjunction with Article 8 (respect for one’s private and family life). The applicants had complained against the exclusion of same-sex couples from the scope of Law 3719/2008 on civil unions, which extended that right only to different-sex couples.

The Court reminded that, according to its case-law, same- and different-sex couples are in comparable situation in what regards their need for legal recognition and protection of their relationship (Schalk and Kopf v. Austria, no. 30141/04, ECHR 2010, para. 99). The Court reiterated that the protection of the family in its traditional sense as well as the interests of the child are both legitimate aims that could in principle justify a difference in the treatment of similar situations. However, the Court entered certain caveats; first, there is a broad range of measures capable of protecting the family in the traditional sense; second, given that the Convention is a living instrument which should be interpreted in present-day conditions, any State, regulating family affairs, ought to take into account societal developments, “including the fact that there is not just one way or one choice when it comes to leading one’s family or private life” [emphasis added] (para. 84). As previously established in the Court’s case-law, sexual orientation is protected under Article 14, and Parties enjoy a narrow margin of appreciation; thus, the different treatment of similar situations on grounds of sexual orientation requires “particularly convincing and weighty reasons” by way of justification.

The Court, then, proceeded to address the flimsy argument of the Greek Government that the raison d’être of the impugned Law is to strengthen the legal status of children born outside marriage. In the mind of the Greek government, the “biological difference between different-sex and same-sex couples, in so far as the latter could not have biological children together, justified limiting civil unions to different-sex couples” (para. 67). Going into the nitty-gritty details of the Law in question, and echoing the arguments put forward by the applicants at the stage of the oral hearings, the Court concluded that this Law was designed first and foremost with the idea of providing a legal alternative to the traditional institution of marriage, and was not confined to the protection of children born outside of marriage. To this end, the Court adduced the fact that the Law allowed different-sex couples without children to enter into a civil union, without extending the same right to childless same-sex couples. Of equal importance was the fact that various sections of the Law regulate the living arrangements between the different-sex partners in a civil union, such as their financial relations and the maintenance obligations as well as the right to inherit, regardless of the existence or not of a child. The Court also held that the Government had failed to demonstrate how the interests of children born outside marriage would have been compromised, had same-sex couples been brought within the scope of the law.

In a separate concurring Opinion, three judges, amongst whom the Greek judge, drew a clear line between the clear-cut trend across the Parties in making civil unions available to same-sex couples and the thorny question of adoption by gay partners which, in their view, still remains controversial.

At the time of writing, there has been neither any coverage in the mainstream Greek press on the ramifications of the Court’s ruling nor any official statement by the Government. It remains to be seen when and how and whether the present Greek (coalition) Government will remedy the existing incompatibility, as found by the Court, between the Law no. 3719/2008 and the prohibition of discrimination taken with the right to one’s private and family life. It is regrettable that back then the Greek government opted, in full knowledge, to adopt a clearly discriminatory law instead of shouldering the political costs of extending rights to gay people; 5 years later, it is high time that the Greek legislature repaired, without any delay, the injustice done to an already discriminated segment of its population.