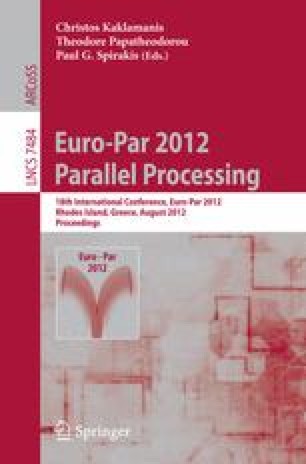 In this talk, we present a selection of important concepts and results in algorithmic game theory in recent years, some of which received the 2012 Gödel Prize, along with some applications in distributed settings.

A famous solution concept for non-cooperative games is the Nash equilibrium. In a Nash equilibrium, no selfish player can unilaterally deviate from his current strategy and improve his profit. Nash dynamics is a method to compute a Nash equilibrium. Here, in each round, a single player is allowed to perform a selfish step, i.e. unilaterally change his strategy and improve his cost. The Nash dynamics terminates if it does not run into a cycle. This is always the case if the game has a potential function. In this case, computing a Nash equilibrium is a \(\mathcal{PLS}\) problem (Polynomial Local Search) and belongs to the large class of well-studied local optimization problems.

The absence of a central coordinating authority can result in a loss of performance due to the selfishness of the participants. This situation is formalized in the notion “Price of Anarchy”. The Price of Anarchy is defined to be the worst case ratio between the maximal social cost in a Nash equilibrium and the optimal social cost. We present the recent results for congestion games and for the special case of load balancing.

Classical game theory assumes that each player acts rationally and wants to improve his profit. This is not realistic in a distributed setting since it requires that each player has the complete information about the state of the system. We introduce the concept of selfish distributed load balancing and describe recent results.

We will also consider distributed algorithms for network creation games. In the past, network creation games have mostly been studied under the assumption that the players have a global view on the network, or more precisely, that the players are able to compute the average distance or the maximum distance to the nodes they want to interact with in the given network, depending on the objective function. A player may then decide to add one or more edges for some extra cost or to drop an edge. We will look at network creation games from a different angle. In our case, the players have fixed distances to each other that are based on some underlying metric (determined by, for example, the geographic positions of the players), and the goal is to study the networks formed if players selfishly add and remove edges based on that metric. We show that for certain metrics like the line metric, tree metric, and the Euclidean metric, certain selfish behavior, that only requires a local view of the players on the network, will lead to stable networks that give a good approximation of the underlying metric.

Nash Equilibrium Stable Network Congestion Game Local View Pure Nash Equilibrium
These keywords were added by machine and not by the authors. This process is experimental and the keywords may be updated as the learning algorithm improves.
Download to read the full conference paper text