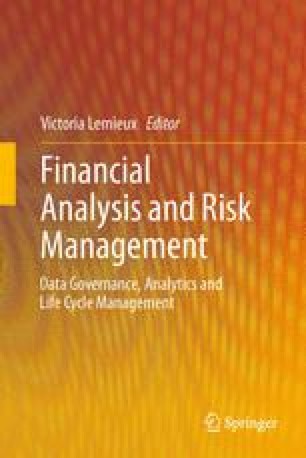 The Office on Financial Research and Operational Risk

We argue that the single largest operational risk (OR) for the Office of Financial Research (OFR) is to be inundated with indecipherable financial contract data. Clear semantics on the attribute level alone is not sufficient for risk avoidance; the OFR needs a semantic system capable of describing the entire intent of the financial contract. We introduce the concept of Contract Types (CT), which encapsulates this semantic. The idea of CTs overrides the cherished yet unexamined separation of data and algorithms, which lies at the core of the observed data chaos in banks. We distinguish the mechanical parts of finance, where separation is counterproductive, from the subjective parts, where a separation makes sense. We conclude with a model that contributes to an operational OFR.

Cash Flow Operational Risk Financial Industry Contract Type Input Element
These keywords were added by machine and not by the authors. This process is experimental and the keywords may be updated as the learning algorithm improves.
This is a preview of subscription content, log in to check access.

Although it is possible to model the vast majority of financial contracts with a relatively small set of standardized CTs, there will always be outliers. This is not only true for the methodology described above, but holds for any analytical methodology. The very notion of standards implies the existence of outliers; in other words, where there are standards, there are also exceptions.

In this appendix we discuss the state of standardization in the financial sector and propose technical solutions to the problem.

Standardization in the Financial Sector

It is common to define standards in public-sector areas. Air, water, electricity, transport, and food are examples of important public sectors, which are more or less regulated. After all, these are public goods we all depend on. If I drink a glass of water I want to be sure that certain standards have been met.

Standards, if they are to be adhered to, require a language through which they can be communicated. In the food industry, for example, the language of chemistry, together with labelling standards for packaging, ensure that the declaration and the contents match.

The financial sector is, in terms of standardization, where the industrial sector was in the middle of the 19th century, when each screw had its own nut. Despite this desperate state, there is a tendency in the financial sector to undo or prevent any standardization effort. Much of this criticism seems to be driven from a protective mode. Whatever the reason behind this tendency,15 we should remember that: the majority of the contracts do follow standards, though undeclared ones. Standards are a hidden fact. By obstinately focusing on the notorious difficulty to tame outliers of finance, we forego solving the vast majority of cases, where this is easily possible. By not being able to fix the one percent, we give up on the 99 % which would be easily fixable. The Commodities and Futures Trading Commission (CFTC) and Securities and Exchange Commission (SEC) prove that standardization is possible even in the “notorious corners” of finance. They do so by forcing Over-the-Counter (OTC) derivatives through an exchange. OTC derivatives such as Collateralized Debt Obligations (CDOs) and complex options have hitherto been considered the most buoyant and innovative part of finance and the most difficult to control. If it is possible to bridle this part, there is hardly an argument left against standardizing the rest. Even if it was impossible to find a solution for the outliers, a system capable of reining in the vast majority of contracts would still be very attractive for an OFR, if an approximation for the rest can be found. Assuming that we can model 99 % of the financial contracts to a high degree of precision with standard contracts and the remaining 1 % with an approximation of 70 % accuracy, we still would get highly precise overall results. It is even possible to standardize nonstandard products from an analytical perspective. This we discuss next.

Standardization of the Outliers

Although seemingly paradoxical, it is possible to standardize even outliers. From Fig. 3.2, we can deduce that if it is possible to generate financial events, it is possible to derive the analysis elements. Generation of financial events in an unrestricted world, however, is difficult or impossible when we have to work with cash flows directly. By doing so, we skip the event line which contains the full information regarding liquidity and value/income/sensitivity. We can salvage the system by producing directly the expected cash flows in two forms: one for the liquidity side and one for value/income/sensitivity (Brammertz et al. 2009).

The system is like a mini-version of the whole system. Figure 3.5 is almost the same picture as the upper part of Fig. 3.2. There are however four notable differences.

What is standard in this system is the structure of the process, which links risk factors, financial contracts, and cash flows.

Since the code has to be written for each product, which is an error-prone process, additional care must be taken from a regulatory perspective. Possible precautions include additional checks and capital charges.

The Boundary Between Standard and Nonstandard CTS

The set of possible contracts is not conclusive or enumerative but must expand over time if new relevant instruments appear on the market. Where standardization ends and non-standardization sets in, is a question of choice. The OFR could set itself, for example, a target to model at least 99 % of all relevant contracts with a 99 % precision, where relevance could be measured by a value, sensitivity, or risk measure and precision by correctness of amount and timing of the expected cash flows. This would demand a study of all existing market instruments. We estimate that 99 % of the current existing variety of contracts can be covered with a mere two and a half dozen mentioned CTs on a 99 % precision level.

Appendix B: A Simple Data Model and Process

Fortunately, the situation can be improved if data is organized around the idea of cash-flow generation. Next we will sketch a simple entity relationship model with the financial contract at its center. This will be followed by a discussion of how to link cash-flow engines to CTs.

Figure 3.6 shows the entity relationship of the model in its simplest form. At its center is the (financial) contract, which is linked to the counterparties, markets, and selection criteria entities. This figure is similar to Fig. 3.2 save for behaviour and selection criteria. There is no relationship between behaviour and contract due to the statistical nature of behaviour, which does not allow for treatment as simple exogenous data.17 Behaviour is instead represented by algorithms with a constant shifting set of parameters. Selection criteria, such as profit centres, product names, and business units, are, on the other hand, factual data that do not directly influence event/cash-flow generation, although can be important in analysis and reporting when used as grouping criteria.

Since market and counterparty data are not our focus, we keep the representation as simple as possible and do not further expand it. Is it, however, possible to represent financial contracts by a simple table? Practice, at least to my experience, has shown that a single table best represents most financial contracts. There would be possibilities to fragment a single table into sub tables such as for principal payment attributes and interest payment attributes. However, in all practicality, such tables increased the readability only slightly at the best, and at worst, actually decreased performance. There are, however, some special cases in the area of exotic options with very rarely used attributes, where sub-tables could be considered.

A basic contract such as a loan, a discount paper, a deposit, or a stock is simply a single record in the contract table. Combined contracts such as swaps, futures, and options are represented by two or more records, with one record corresponding to the parent contract (e.g. the option) and additional records to the underlying(s). An interest rate swap, for example, will be stored using three contract records, with the first representing the swap agreement as such and the two other records corresponding to the two legs of the swap.

The Contract Table and Validation

The contract table has about 150 financial event/cash-flow determining attributes. The 150 attributes cover all cases of all the CTs. In its simplest form the table can be imagined to have 150 columns or attributes along Fig. 3.7 with each line representing a contract. Combined contracts such as swap would occupy several lines.

It has to be noted that in this table each attribute appears exactly once. This avoids the multiple parallel existences of similar or the same attributes found in many databases, guaranteeing a single and precise interpretation. For example, the principal of a bond or a loan or the underlying of an option are defined and interpreted exactly the same way.

While some of these 150 attributes are commonly shared among many CTs, many of them are not shared by all. Actually, many CTs can be described with only a few dozen of them. Figure 3.8 shows a tiny excerpt of a table describing this relationship, with the same attributes from Fig. 3.7 on the vertical and CTs on the horizontal.

The cells of the table show whether an attribute is compulsory (NOT NULL), whether it is not applicable (NA), or whether it is applicable but can be left empty (NULL). Additional information is possible, for example, conditional nullity, which depends on the existence and value of certain other fields. This information can be considered CT sensitive validation rules.

Most important in this exercise is a clear and concise communication with the financial sector. The following minimal conditions have to be met:

The above conditions define the data standard independent of where and which database the data comes from. The format for data exchange with the OFR should allow for semantic as well syntactic validation of the submitted data. This could be done, for example, by using XBRL.

Although a good start, this is not all that is required; as we argued in Sect. 3.4.2, precise semantics on the attribute level alone is not sufficient. We need clear semantics on the level of event and cash-flow generation.

The data described in the previous section represents the input data in the upper section of Fig. 3.2. Although indispensible for the type of analysis which the OFR should perform from an analytical perspective, the lower part of Fig. 3.2 is of ultimate interest. To make sense of this analytical data, a study of the event/cash-flow layer in between inputs and analytical outputs is required. The engine that connects input data and final analytical results is often referred as cash-flow engine.18

For an event generation engine to be made available, the following minimal standards must be met:

Once financial events and cash flows are determined, there is a final step of deriving the analysis elements liquidity, value, income, and sensitivity and, where applicable, risk.19 These steps can be formulated independent of CTs.

Whereas liquidity is a pure cash flow, independent of any valuation rule, it is obviously not the case for value and income. However, once bookkeeping rules are set, the result is again unanimous.

To summarize, we need a cash-flow engine plus an engine that turns financial events into liquidity, value, income, and sensitivity. Everything has to be published and made publicly available via easy to understand concepts and support tools. Only then is the system complete.

Assuming information is available on the attribute and contract level, participants can start the mapping process. Mapping means turning the data from an internal representation into the target standard representation. As long as it can be retrieved, how the data is organized is of minor importance. The mapping process takes the following steps:

The OFR will be in a position to interpret the data correctly and to test hypotheses.