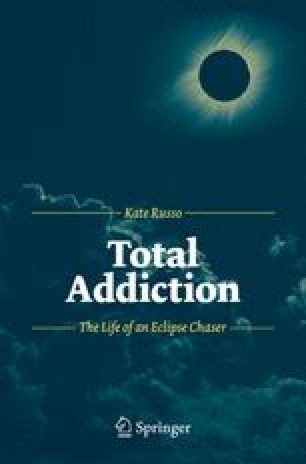 A Personal Introduction to Eclipse Chasing

My eclipse interest was, I believe, shaped during my childhood by my father’s curiosity about the night sky and by witnessing a partial eclipse when I was about 7 years old. I also recall reading Enid Blyton’s book The Secret Mountain when I was eleven, which featured a total solar eclipse in the storyline. I had always been drawn to the image of a total eclipse, and thought it was mysterious and worth seeing 1 day. But it was not until my late twenties that I stood under the shadow of the Moon for the very first time. Since that eclipse on the coast of France in 1999 I have been an eclipse chaser. I have now seen seven total solar eclipses. My eclipse chasing adventures have taken me to places around the world that I may not have visited otherwise. My future travel is now determined by where the shadow of the Moon falls upon the Earth, and I know that I will be an eclipse chaser for as long as I am able.

Total Solar Eclipse Heavenly Body Late Twenty Total Eclipse Eclipse Experience
These keywords were added by machine and not by the authors. This process is experimental and the keywords may be updated as the learning algorithm improves.
This is a preview of subscription content, log in to check access.