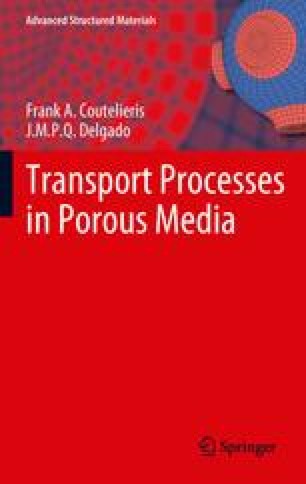 The fundamentals of single phase flow within porous media are presented in this chapter. Analytical solutions for the flow field in granular media are obtained using cell models of various geometries. Macroscopic approaches (Darcy law and its extensions) as well as numerically obtained flow fields in stochastically constructed granular structures are also discussed.

Porous Medium Stream Function Single Phase Flow Liquid Permeability Artificial Compressibility
These keywords were added by machine and not by the authors. This process is experimental and the keywords may be updated as the learning algorithm improves.
Download chapter PDF

The motion of a continuum is generally described by a usually linear relation between some fluxes and the relative driving forces. Following the trend of determinism, a large number of constitutive (phenomenological) equations describing relationships between fluxes and driving forces exist in several fields of physics. These include Newton’s law (which correlates developing forces with acceleration, i.e. velocity gradient), Fourier’s law (which correlates heat flow with temperature gradient), Fick’s law (which correlates mass flow with concentration gradient), Ohm’s law (which correlates current with potential gradient), etc. The description of flow in porous media is especially difficult due to the media’s complex geometry. Furthermore, a general law of the continuum theory is the law of conservation of extensive properties such as mass, momentum and energy. The resulting equations of continuity are commonly referred to as field equations and must be considered along with flow equations to adequately describe flow in porous structures.

Experimental and theoretical investigations are normally associated with the scale of the application considered. In general, these scales are microscopic (or “pore” scale), mesoscopic (or “local” scale), and macroscopic (or “field” scale). As far as the phenomena considered (and the governing equations as well as the relative solutions) are strongly dependent on the scale, the transition between different scales is of great importance. This transition is usually considered from the lowest “pore” level, where experimental and simulation results could be easily obtained, to the higher “field” scale, where data are hard to be measured. This up-scaling process is the subject of many studies (see  Sects. 5.5 and  7.5).

During his experiments on flow in pipes, Darcy found and proved that the pressure drop caused by the flow is proportional to the velocity. This result is expressed by the phenomenological Darcy law equation [7]:
$$ q = A\frac{k}{\mu }\frac{\Updelta p}{L} $$
(3.2)
which generally describes the fluid flow through a porous medium. In the above formula, q is the volumetric flowrate through a cross-section, A of the porous medium, which is perpendicular to the flow direction, L is the length of the porous media in direction of flow, \( \Updelta p \) is the pressure difference along the porous medium, \( \mu \) is the viscosity of the flowing fluid, and k is the permeability as a material property of the porous medium. This equation can be written in differential form as:
$$ \nabla p = - \frac{\mu }{k}{\mathbf{u}} $$
(3.3)
where \( {\mathbf{u}} \) denotes the velocity vector of the fluid. It is important to note that the Darcy law is only valid for a laminar and steady state one-phase flow through a porous medium. In addition, the fluid must be largely incompressible.
An extension to the Darcy law is the isotropic law introduced by Brinkman law [3]:
$$ \nabla p = - \frac{\mu }{k}{\mathbf{u}} + \mu_{eff} \nabla^{2} {\mathbf{u}} $$
(3.4)
where \( \mu_{eff} \) is an effective viscosity which may be different from \( \mu . \) The Brinkman law is a slight modification of the Stokes equation and one of its practical advantages is that applications and analytical tools devoted to the Stokes approach can be used with small adaptations.
One of the most significant applications of Darcy’s law (3.2) is the calculation of permeability of a porous material. After solving the equation for k:
$$ k = \frac{q}{A}\mu \frac{L}{\Updelta p} $$
(3.5)
the permeability of a porous media is defined as 1 Darcy, if a fluid of 1 cP viscosity, flowing through a cross-section of 1 cm2 at a rate of 1 cm3/s, causes a pressure drop of 1 atm/cm. Many years later, Klinkenberg observed that gas permeability is not the same as liquid permeability for the same porous structure, since gas permeability depends on pressure [16]. The correlation between gas permeability \( k_{gas} , \) liquid permeability \( k_{liq} \) and mean pressure inside the core \( p_{mean} , \) is given as:
$$ k_{gas} = k_{liq} \left( {1 + \frac{b}{{p_{mean} }}} \right) $$
(3.6)
where parameter b depends on the gas studied.

Modeling approaches for microscopic conditions can be described by the appropriate flow conditions equations (creeping, laminar, turbulent, etc.). It is important to note that these equations are defined in the pore space, therefore the boundary conditions in the solid–fluid interface are essential to solve the flow problem. Obviously, equations of motion and the accompanying boundary conditions, are strongly dependent on the application considered, thus many different approaches have been proposed in the literature. The problem here is the derivation of representative macroscopic quantities from the microscopic results, a procedure which hardly allows for a generalized unique solution. As the extensive discussion of these issues is not within the scope of this book, our presentation is limited to granular porous media, where analytical solutions are also available through the cell models.

As mentioned in  Chap. 2, cell models have been widely used for mathematical simulation of the flow conditions through porous structures, especially granular materials. According to these models, the grains are distributed throughout the predefined space, and each grain is enclosed in a cell formed by the liquid phase. The cell model can be used to reduce the solution of the boundary-value problem for the flow around a system of particles to the problem for a single particle, where the flow field solution can be obtained by the analytical solution of the Stokes problem. The cell models differ in their boundary conditions, as discussed below. A wide variety of assumptions exists for the shape of the grains, and the cells in general: spherical, cylindrical, spheroidal, etc. Different approaches for the physical conditions and mathematical formulations have also been presented for each geometry considered, therefore producing an extensive range of combinations between geometrical and physical considerations. These combinations are described below.

The model proposed by Happel [10, 11] is similar to that of Kuwabara but differs in the fluid motion. Kuwabara’s stationary grain is located in a flowing fluid, however, Happel proposed a grain moving under constant velocity in an otherwise quiescent surrounding fluid. This dissimilarity imposes different boundary conditions, as depicted in Fig. 3.3.

Compared to Kuwabara’s approach, Happel’s model has the additional advantage of being autonomous from an energy point of view. This benefit is the main reason for the wider acceptance of Happel’s approach rather than Kuwabara’s model.

The visual interpretation of sample flow in Happel’s sphere-in-cell is depicted in Fig. 3.2.

Further to “sphere-in-cell” models, both Happel and Kuwabara also proposed similar “cylinder-in-cell” ones. The similarity in the formulations and the consequent analytical solutions is due to the two-dimensionality of the mathematical description that allows us to ignore the shape imposed by the third dimension.

In the presence of porous media, the need for a realistic description of the structure of a porous medium significantly increases the mathematical complexity of a model. As porous media are generally characterized by highly complex internal geometry, appropriate modeling is necessary for the derivation of meaningful conclusions. Numerous industrial and technological applications involving fluid flow and mass transport processes within multi-particle assemblages have attracted scientific interest in the last decades, mainly focusing on industrial physicochemical processes (sedimentation, catalysis, etc.), alternative energy sources (fuel cells, etc.), and separation techniques (chromatography, filters, etc.). Although arrays of regularly spatially distributed spheres represent an idealization of real granular media, they have been widely studied from both the fluid dynamics and mass transport points of view [19, 21]. On the other hand, due to their complex geometry, random particle distributions were the subject of rather limited investigations until the 1990s (see [2, 18]). Since then, fast advances in computational capabilities have contributed to reviving interest on this topic with emphasis placed on hydrodynamic aspects [5, 13, 22].

To define a realistic domain to solve flow and transport problems, a granular porous medium was constructed in the form of a spherical particle assemblage. The structure was digitized and the phase function (equal to zero for solid and unity for the pore space) was determined to obtain the specified porosity. More specifically, representation of the domains under consideration was achieved as follows:
Obviously, many three-dimensional representations can be generated by the above algorithm for a specific porosity value. Therefore, it is necessary to validate the results against these configurations to ensure that the macroscopic results are independent of each specific realization. A graphic representation of a representative medium for a typical porosity of ε = 0.43 is presented in Fig. 3.7.
A randomly selected two-dimensional cut of this domain in is shown in Fig. 3.8, which also depicts the grid of the numerical solution.

For the numerical simulations, the velocity field was computed numerically by solving the Stokes equations
$$ \nabla p = \mu \nabla^{2} {\mathbf{v}} $$
(3.40)
$$ \nabla \cdot {\mathbf{v}} = 0 $$
(3.41)
$$ {\mathbf{v}} = 0 \,{\text{at}}\,{\text{liquid}}\!-\!{\text{solid}}\,{\text{interface}}$$
(3.42)
where v, p, and μ are the velocity vector, pressure field, and fluid viscosity, respectively.
The procedure for solving the Stokes flow problem involves discretization in terms of cubic elements as follows [1, 6, 14, 15]: At the pore level, a staggered marker-and-cell (MAC) mesh is used, with the pressure defined at the center of the cell, and the velocity components defined along the corresponding face boundaries. The resulting linear system of equations is solved by a successive over-relaxation (SOR) method. An initial estimate of p is determined by solving the Laplace equation. Next, the velocity vector v is calculated from the corresponding momentum balance and the continuity equation \( \nabla \cdot {\mathbf{v}} = 0. \) The pressure is corrected through an artificial compressibility equation of the form:
$$ \frac{dp}{dt} = \nabla \cdot {\mathbf{v}} $$
(3.43)

Essentially, the method adds an artificial density time derivative related to the pressure by an artificial equation of state p = βρ, where β is an artificial compressibility factor. Similar to the compressible momentum equation, c = β 1/2 is an artificial speed of sound and for stability during the iterative procedure, its magnitude should be such that the respective artificial Mach number, \( M = \frac{R}{c}\mathop {\max }\limits_{D} \left( {\sum\limits_{i} {u_{i}^{2} } } \right)^{{{\raise0.7ex\hbox{$1$} \!\mathord{\left/ {\vphantom {1 2}}\right.\kern-\nulldelimiterspace} \!\lower0.7ex\hbox{$2$}}}} \) is low (M ≪ 1), where R is the relevant Reynolds number. In the limiting case of R → 0, which is the present case, any finite value of β should meet this criterion. Thus, β = 1 was selected although it is evident that the exact value cannot have any effect on the final (steady state) results, since at steady state the artificial density time derivative is equal to zero.

The above steps are repeated until convergence is reached. This numerical scheme for the determination of the velocity field has been widely validated in terms of both the velocity field and the corresponding permeability [1, 6, 14, 15].

Figure 3.9 show the results of the (a) pressure field, (b) velocity, and (c) stream function for a typical porous medium of ε = 0.72. A randomly selected two-dimensional cut of the medium is considered so the results can be visualized clearly. The boundary condition at the closed walls is non-slip, at the left boundary an inflow was imposed, and at the right boundary an outflow condition. Small vortices and recirculating flow are produced in the medium depending on the pore size, while smoother profiles are obtained at the inlet and outlet. The velocity gradient observed from top to bottom at the inlet surface is generated because the inflow condition ensures constant molar flux instead of a plug-type velocity vector. Finally, it is interesting to observe that the faster flow paths are generated by the porous structure and they appear wherever pore diameters are fairly small.