Ontology Engineering in a Networked World 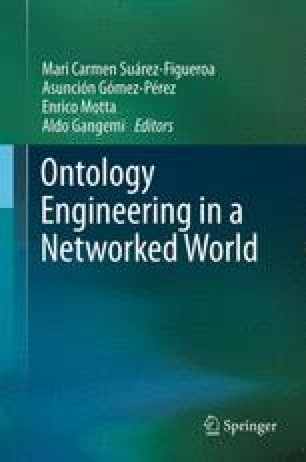 Ontology Engineering in a Networked World pp 147-170 | Cite as

This chapter presents methodological guidelines that allow engineers to reuse generic ontologies. This kind of ontologies represents notions generic across many fields, (is part of, temporal interval, etc.). The guidelines helps the developer (a) to identify the type of generic ontology to be reused, (b) to find out the axioms and definitions that should be reused and (c) to adapt and integrate the generic ontology selected in the domain ontology to be developed. For each task of the methodology, a set of heuristics with examples are presented. We hope that after reading this chapter, you would have acquired some basic ideas on how to take advantage of the great deal of well-founded explicit knowledge that formalizes generic notions such as time concepts and the part of relation.

Generic Ontology Development Team Domain Ontology Ontology Development Implementation Language
These keywords were added by machine and not by the authors. This process is experimental and the keywords may be updated as the learning algorithm improves.
This is a preview of subscription content, log in to check access.

A mereology is a formal theory of parts and associated concepts (Borst 1997; Schneider 2003). We have said “a mereology” instead of “the mereology” because different assumptions can be taken into account in the formalization of parthood. Therefore, different mereologies can be proposed.

In the following paragraphs, we will show one of the mereologies presented by Varzi (2007).

Theory M. Most of the authors agree on the following core of axioms (named with A) and definitions (named with D) (Varzi 2007). Along these paragraphs, we use examples of territories to clarify the meaning of axioms and definitions. The mentions to administrative units really refer to their physical territories.
A number of additional mereological predicates can be then introduced by definition:

Theory M may be viewed as embodying the common core of any mereological theory. A.1–A.3 should be extended to build a mereology.

Most of the authors strengthen that A.4 should be incorporated to M as a further fundamental principle on the meaning of part of. Other authors provide scenarios that could be counterexamples of this principle. However, it is far from being demonstrated that such supposed counterexamples have implications in computer applications.

The rest of mereologies starting from MM are explained with examples in (Fernández López et al. 2008; Suárez-Figueroa 2010).