Vienna Convention on the Law of Treaties 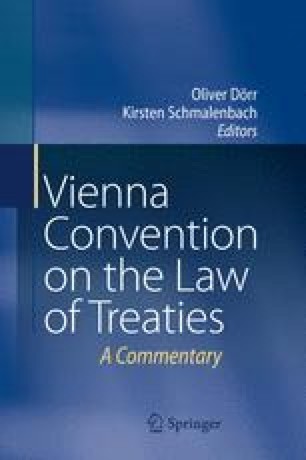 Article 54. Termination of or withdrawal from a treaty under its provisions or by consent of the parties

Part V of the VCLT on invalidity, termination and suspension of the operation of treaties sets out exceptions to the general rule pacta sunt servanda (Art 26). It consists of five sections. Section 3 (Arts 54–64) deals with the termination of treaties and the suspension of their operation. It both systematically and logically follows Section 2, which regulates the invalidity of treaties (Arts 46–53), for only valid treaties can be terminated or suspended pro futuro (Arts 70 and 72), whereas invalid treaties are void ab initio (Art 69). Thus, the two sections overlap at no point, but thematically interlock where treaties come into conflict with a peremptory norm of general international law (ius cogens): in this case the treaty will be void according to Section 2 (Arts 53 and 71), if such a conflict existed already at the time of its conclusion; whereas the later emergence of a conflicting ius cogens norm automatically terminates the treaty under Section 3 (Arts 64 and 71).

Security Council Treaty Provision Genocide Convention Treaty Obligation Multilateral Treaty
These keywords were added by machine and not by the authors. This process is experimental and the keywords may be updated as the learning algorithm improves.
This is a preview of subscription content, log in to check access.