Introduction to the Physics of Electrons in Solids 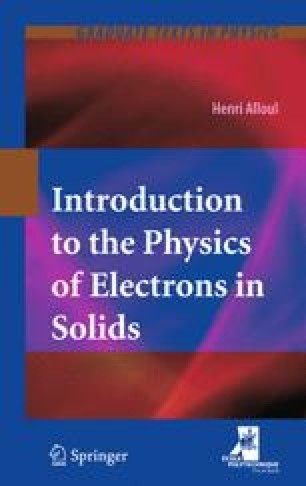 Our forebears were interested in metals for their malleability (at the forge) and good thermal conductivity (for making cooking vessels), and they have been used for centuries as a raw material for forging tools and weapons of various kinds. But their most characteristic feature, namely their good electrical conductivity (about 20 orders of magnitude greater than insulators), has only been recognised for a few centuries, since Coulomb and Ampère discovered the existence of electrical charge. In the preceding chapters, our discussion of allowed or forbidden energy bands for the electron levels in crystalline solids explains the origin of this qualitative difference between metals and insulators. However, we have not yet established a physical understanding for the limitation of conductivity in metals as described by Ohm’s law. Indeed, we have seen that an electron in a metal is in a quantum state characterised by a Bloch wave function, which is a wave function extending throughout the space occupied by the metal. Since this state is stationary, one would expect an electron to be able to move freely throughout the volume of the metal without dissipation of energy, just as any electron in an atom remains around the nucleus in a stationary state, without loss of energy. The idea of electrical resistivity is therefore quite foreign to the quantum description we have made of the electrons in a perfect metallic crystal.

Conduction Band Dispersion Relation Valence Band Wave Packet Effective Mass
These keywords were added by machine and not by the authors. This process is experimental and the keywords may be updated as the learning algorithm improves.
This is a preview of subscription content, log in to check access.