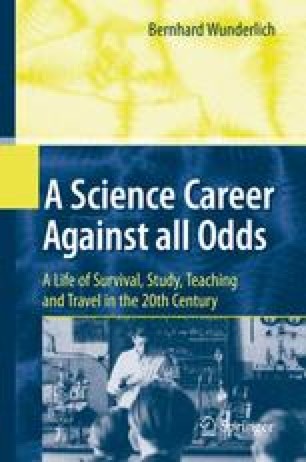 Over the Labor Day weekend of 1958 we arrived in Ithaca, NY, at 18 Hawthorne Circle, as shown in Figure 1. The trip was not without difficulties. We learned that a trailer cannot be easily moved by a passenger car, and that the great looking Uniroyal tires were not designed for such a job (at least at that time). Just as now, it was said then that the tires by Uniroyal combine the responsive handling of a performance tire with the comfort of a passenger tire. Thus, we had hoped for an “even wear and durability, exceptional handling, and great looks,” all benefits still advertised today.1 Just outside Chicago, we lost the right rear tire and stopped on the road side to replaced it with the spare. The side wall could not carry the load of the trailer and had broken in a way that defied repair. Fortunately, we bought a new tire as a replacement just a down the road. Not long thereafter, the left rear tire gave way and we went through the same exercise once more. Shortly before we reached Ithaca, the original spare on the right rear gave out also. All three tires had broken side walls. This simple, but expensive experiment proved that the load was excessive for the ‘Uniroyals,’ but not for the newly bought ‘Goodyears.’ After our arrival in Ithaca, we picked up the key for our new living quarters, unloaded the furniture and other goods from the trailer, and returned the U-Haul to the local dealer. He said: “Yes, I know, Uniroyals are not the tires to have for such a haul, their side-walls are too weak.”

Nobel Prize Chemistry Department Rensselaer Polytechnic Institute Local Dealer Christmas Tree
These keywords were added by machine and not by the authors. This process is experimental and the keywords may be updated as the learning algorithm improves.
This is a preview of subscription content, log in to check access.