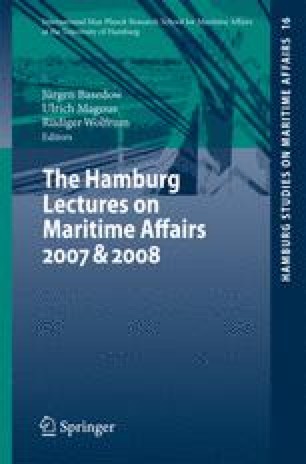 The Peaceful Settlement of Disputes on Maritime Delimitation

The subject of this presentation requires some clarification bearing on three questions: (i) What is maritime delimitation? (ii) What is meant by peaceful settlement of disputes? (iii) Why is the topic about to be addressed an important one? Everyone knows - or thinks he knows - about the drawing of land boundaries, that is, lines separating territories placed under the sovereignty of neighbouring States. Although it has been said that such lines are to be established according to certain principles, for instance the idea that natural boundaries should be preferred to artificial ones, or that, in the absence of agreement, boundaries should follow the watershed, no such principle has actually been shown to exist under international law. This means that, unless there is a treaty or another legal title, an arbitral award for instance, the territorial sovereignty of a State stops at the points where the effective dominion of that State ends and that of its neighbour begins. The points so defined will form the boundary. It is, therefore, the criterion of effectiveness that conditions the fixing of land boundaries. The situation is different where maritime delimitations are concerned. Maritime delimitations have to be effected wherever, in their absence, maritime spaces of two or more States would overlap. Basically two situations must be distinguished: that of States whose coasts are located opposite each other - Singapore, Malaysia and Indonesia, for example, where it is necessary, in the straits of Singapore and Malacca, to separate the maritime areas belonging to each State - or in the British channel, where the continental shelves of the United Kingdom and France required delimitation; and situations where the coasts of two (or possibly more) States are adjacent and where it will be necessary to divide laterally the territorial sea, the EEZs and the continental shelves of those countries, witness the situation of Libya and Tunisia, for example. Delimitation can, of course, be effected by treaty; if there is no agreement, a series of principles, rules and techniques will become applicable. These principles, rules or techniques have little to do with title or effective domination and will be briefly examined in a moment. For the time being, suffice it to say that the main link between the land and the maritime domain is that “the land dominates the sea”: coastal States are entitled to the maritime spaces adjacent to their coastlines. In other words, and to borrow from the vocabulary of civil law, such spaces are accessories to land.

Continental Shelf Dispute Settlement Arbitral Tribunal Land Boundary Peaceful Settlement
These keywords were added by machine and not by the authors. This process is experimental and the keywords may be updated as the learning algorithm improves.
This is a preview of subscription content, log in to check access.