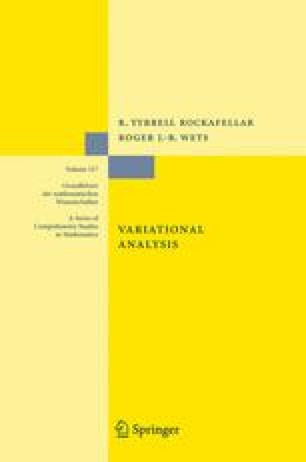 Problems involving ‘integration’ offer rich and challenging territory for vari-ational analysis, and indeed it's especially around such problems, under the heading of the calculus of variations, that the subject has traditionally been organized. Models in which expressions have to be integrated with respect to time are central to the treatment of dynamical systems and their optimal control. When the systems are ‘distributed’, with states that, like density distributions, are conceived as elements of a function space, integration with respect to spatial variables or other parameters can enter the picture as well. In economics, it may be desirable to integrate over a space of infinitesimal agents. Applications in stochastic environments often concern expected values that are defined by integration with respect to a probability measure, or may demand a sturdy platform for working with concepts like that of a ‘random set,’ a ‘random function’, or even a ‘random problem of optimization’.

Satisfactory handling of problem models in these categories usually requires an appeal to measure theory, and that inevitably raises questions about measurable dependence. This chapter is aimed at providing the technical machinery for answering such questions, so that analysis can go forward in full harmony with the ideas developed in the preceding chapters, where variable points are often replaced by variable sets, the geometry of graphs is replaced by that of epigraphs, and so forth.

Integral Functional Countable Family Countable Union Measurable Selection Pointwise Limit
These keywords were added by machine and not by the authors. This process is experimental and the keywords may be updated as the learning algorithm improves.
This is a preview of subscription content, log in to check access.