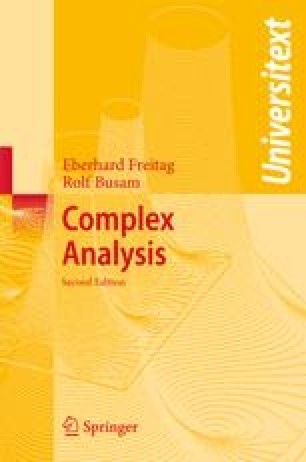 Analytic number theory contains one of the most beautiful applications of complex analysis. In the following sections we will treat some of the distinguished pearls of this fascinating subject.

We have already seen in Sect. VI.4 that quadratic forms or the corresponding lattices can serve to construct modular forms. The Fourier coefficients of the theta series associated to quadratic forms or to lattices have number theoretical importance. They appear as representation numbers for quadratic forms, and respectively as numbers of lattice points of a given norm. Due to the general structure theorems for modular forms, one can bring together theta series and Eisenstein series. We will compute the Fourier coefficients of the Eisenstein series, obtaining thus number theoretical applications. In particular, in Sect. VII.1 we will find the number of representations of a natural number as a sum of four or eight squares by purely function theoretical means.

Starting with the second section, we will be concerned with Dirichlet series, including the Riemann ζ-function. There is a strong connection between modular forms and Dirichlet series (Sect. VII.3). We prove Hecke’s Theorem, claiming a one-to-one correspondence between Dirichlet series with a functional equation of special type and Fourier series with special transformation property under the substitution \(z \mapsto - 1/z\) and with certain asymptotic growth conditions. This correspondence will be obtained by means of the Mellin transform of the G-function. As an application, we obtain in particular the analytic continuation of the ζ-function into the plane, and also its functional equation.