The Value of Information Updating in New Product Development 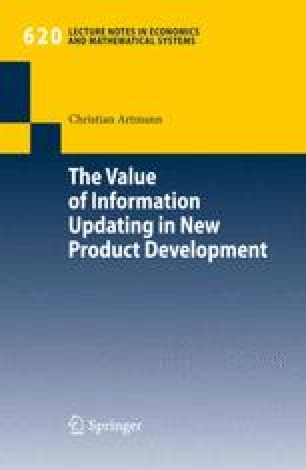 At the beginning of the 21st century, the effects of the proceeding globalization are clearly visible. Almost every company in one of the old, established economies is affected by it and faces increased competition. While these firms competed in fairly stable markets against known rivals for a long time, the pattern has significantly changed over the last decade. Companies in emerging markets are increasingly becoming capable of producing goods at comparable quality, but at significantly lower costs due to advantages in wages, taxes, or (environmental) regulations compared to their established competitors. Responding to these developments by outsourcing business processes and shifting less knowledge intensive activities like production or assembly to low-wage countries has only a limited, short-term effect in a globalized world. Companies are therefore increasingly recognizing that their competitive advantage rests on the capability of continuously developing innovative products and launching them successfully in the market (Holman et al. 2003).

Real Option Uncertainty Reduction Outsource Business Process Real Option Model Selling Season
These keywords were added by machine and not by the authors. This process is experimental and the keywords may be updated as the learning algorithm improves.
This is a preview of subscription content, log in to check access.