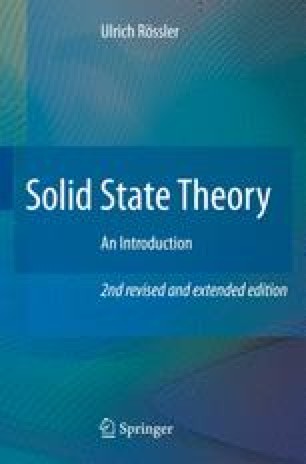 Different sections of this chapter have provided several aspects of disorder, and the influence it takes on the electron states. As we have seen in Sect. 9.1, single impurities can lead to discrete energy levels in the band gap region of semiconductors. These (shallow or deep) bound impurity states are localized, and their wave functions decay exponentially away from the center. But, impurities can modify also the electronic states within a band as resonant states. However, such modifications are expected to be small in regions of high density of extended states. With increasing impurity concentration the bound state wave functions start to overlap and lead to the formation of an impurity band with a continuous density of states, which can eventually merge with that of the nearby energy band. This situation is schematically depicted in Fig. 9.8. Instead of a sharp band edge resulting from the periodic crystal potential as shown in Fig. 9.2, the electrons close to the band edge experience a random potential caused by the impurities. In this potential landscape, states with low energy are localized with a finite localization length λ, while those with sufficiently high energy are not confined and extend over the whole solid as λ increases to infinity. This scenario implies that there must be a certain critical energy ε c which separates the extended from the localized states and that it is likely to be in a region with small density of states or close to the band edges.

Green Function Landau Level Insulator Transition Impurity Potential Coherent Potential Approximation
These keywords were added by machine and not by the authors. This process is experimental and the keywords may be updated as the learning algorithm improves.
Download to read the full chapter text