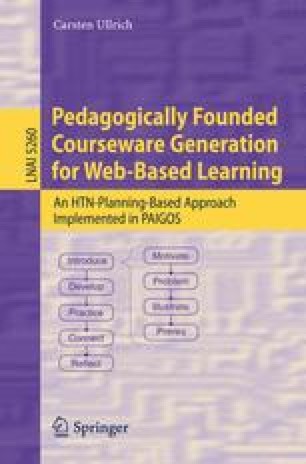 The concept of learning objects and their usage just-in-time, at the precise moment whenever necessary, adapted to the context, is as old as technology-enhanced learning itself:

The basic limitation of films in education is that the filmed material has not been programmed properly into the course of study. Only now, twenty years after the advent of the technique, are we beginning to think of eight millimeter, cartridge load, single concept films for education. Try to visualize two to ten minute segments of films, in self-load, self-thread cartridges, on the shelf in every classroom so that students or the teacher can display a demonstration of a scientific principle, explanation of a theorem, or an event in history, anytime during the class or course, simply by selecting the proper cartridge and pushing it into a rear screen projector. Such could be the potential of filmed material, properly programmed, in the future. [170]

This quote, from the very first international conference on technology-enhanced learning in Germany in 1965 paints a future in which learning objects instantiated in video cartridges are “programmed” (the predominant jargon at that time of behavioristic learning theories) into the course, selected by students or teachers. This vision did not include the automatic selection of learning objects, albeit the necessary techniques were already under investigation for almost a decade.

About ten years earlier, in 1956, a conference in Dartmouth gave birth to the field “Artificial Intelligence”. The aim of describing any feature of intelligence so precisely that machines can simulate it [98] today include the skill of teaching, resulting in applications that support the student in various ways while learning.

The work in this book describes teaching knowledge required for the automatic assembly of courseware in a previously unavailable level of detail. A large set of primitives, covering basic functionalities such as searching for learning objects, inquiring about the learner’s competencies, inserting learning objects, and others, are formalized. From these basic building blocks, scenarios are assembled that support students in achieving complex learning goals. This set of pedagogical knowledge is then integrated into a Web-based, service-oriented architecture, in order to make this valuable expert knowledge available to others. At the same time, this work does not marginalize practical considerations. Thorough summative and formative evaluations assessed the acceptance of such unfamiliar paradigms by students, and technical evaluations made sure that the performance is suited for application in the real-world.

The idea of inserting learning objects just-in-time in a course is thus realized – albeit not based on film cartridges. In the following, we will start this chapter by putting the above example into the world of today, i.e. the world of digital resources.