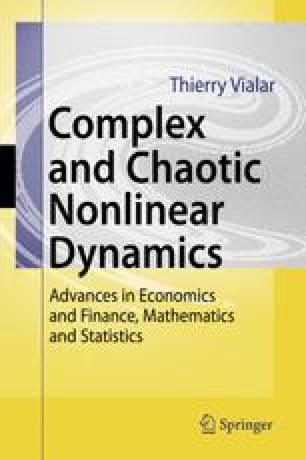 This chapter presents three other tools to approach complex, nonlinear and chaotic dynamics. We will consider the Delay-model, the Singular Spectrum analysis and the Brownian motions (fractional or non-fractional). Firstly, we present the delay-model which is applied to the logistic equation. According to the Medio's work, a discrete-delay is integrated into the construction of an economic model by means of a convolution. The lengths of lags are distributed in a random way in the population. The delay is in fact modelled by means of a random variable which is characterized by its probability distribution. We will notice that in this way, the system built rocks more tardily to the chaos. We will observe a shift of bifurcation points, but also an unhooking in the trajectory.

Delay-model applied to the logistic equation. We will use the equation with the first-order differences used by Robert May. The central element of the model is the concept of “delay”. For a macroeconomic consumption model for example, if we postulate that there is an (unspecified) great number of agents, and that all these agents answer to a certain stimulation with given discrete-lags, the lengths of lags are different for various agents and are distributed in a random way in the population. In a global model, in the whole population, the reaction times are aggregate. In the described case, we can model the reaction-time by means of a random variable that will represent the global length of the lag.

Brownian Motion Fractal Dimension Random Walk Fractional Brownian Motion Logistic Equation
These keywords were added by machine and not by the authors. This process is experimental and the keywords may be updated as the learning algorithm improves.
This is a preview of subscription content, log in to check access.