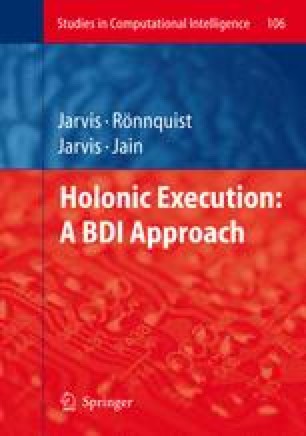 With respect to situated agents, two major schools of thought prevail – behaviour-based agency and rational agency. The former is exemplified by the subsumption architecture of Brooks (Brooks, 1999); the latter by the BDI model (Bratman, 1987) and Soar (Laird et al, 1987). BDI frameworks include IRMA (Bratman et al, 1988), PRS (Georgeff and Lansky, 1987), dMARS (d’Inverno et al, 1997), JACK and JACK Teams (Agent Oriented Software, 2008b) and GORITE (Rönnquist, 2008). Other frameworks, such as JADE (JADE, 2006) are available and are being used to develop holonic systems1, but we have chosen to focus on Soar and the BDI model as they have been used for the past 20 years in the development of a wide range of knowledge rich, industrial strength applications (Jones and Wray, 2006).

Plan Language Plan Step Team Plan Team Structure Task Team
These keywords were added by machine and not by the authors. This process is experimental and the keywords may be updated as the learning algorithm improves.
This is a preview of subscription content, log in to check access.