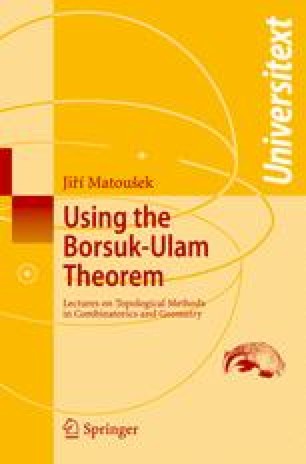 The informal statement that gave the ham sandwich theorem its name is this: For every sandwich made of ham, cheese, and bread, there is a planar cut that simultaneously halves the ham, the cheese, and the bread. The mathematical ham sandwich theorem says that any d (finite) mass distributions in ℝ d can be simultaneously bisected by a hyperplane: This geometric result has many interesting consequences.

Chromatic Number Moment Curve Proper Coloring Open Hemisphere Ulam Theorem
These keywords were added by machine and not by the authors. This process is experimental and the keywords may be updated as the learning algorithm improves.
This is a preview of subscription content, log in to check access.